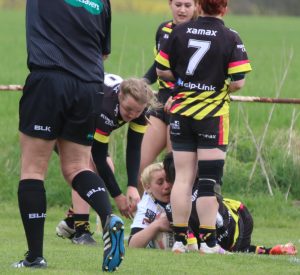 The home team showed they meant business in the latest league game as, only 2 minutes into the game, Jasmine Rowley scored after some fine inter-passing between Andy Dobson and Amy Smith.  Shortly afterwards Featherstone were on the attack again and Sarah Dunn took a short pass and accelerated through the defence to touch down, Katie Cooper-Birkenhead kicking the goal.

Sinead Peach then, on the last tackle, took the ball at acting half, and burrowed over. The away side were defending relentlessly but after a high kick by Katie C-B was fumbled by their full back, Amy Smith went over to score.

Ten minutes from the half time whistle and Gemma Walsh showed great determination running up the slope, which resulted in Sinead Peach giving a well-timed short pass to Andy Dobson, try and goal.

The final try of the half went to Natalie Harrowell on her return after injury (great way to mark her return) a powerful spin away from the two defenders to put the ball down, goal added. 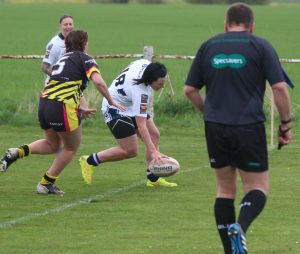 In the second half, Featherstone carried on where they had left off and just one minute into the half Sinead Peach scored her 2nd, following a great run from Jess Hammond, Katie C-B added the 1st of 5 second half kicks.

Although Featherstone were having a good percentage of the attacking play, they also showed a powerful defensive side to their game, which had been lacking the previous week, and were rewarded when a turnover saw Sarah Dunn receive the ball 30 metres out in centre field, with perfect step off her right foot to go round the full back to score.

The home team were in no mood to let up and further scores from Jasmine Rowley, Sinead Peach (hat trick) and Jasmine Rowley again (hat trick) finished with tremendous skill when on her back, which took the score to 56 – 0. 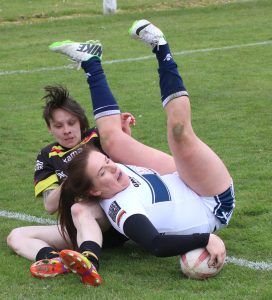 Natalie Harrowell then took her tally to two when a floated long pass from Gemma Walsh was taken over the whitewash. Gemma Walsh followed with a try of her own after bursting the defensive line.

The final try went to Jasmine Rowley when she picked up the ball on half way and with a Leigh defender in hot pursuit out-paced her to score wide right.

Next game will be on Sunday 15th May when Featherstone will be away to Oulton Raidettes while Leigh Miners Rangers will travel to Bradford Bulls.