England Stars Lucy Bronze and Karen Bardsley laced-up to launch girls only football initiative when they took part in an historic football match this weekend, against a team of 100 school girls, as the FA and SSE launched a new initiative to increase the number of girls playing football across the country. 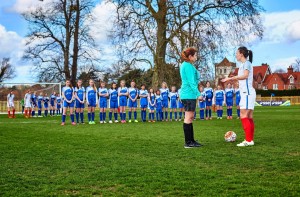 Look at that wall – Lucy lines up a free kick!

The England stars were subject to one of their most testing fixtures yet, as a side of girls between the ages of 5 and 14 put a special England Ladies XI through their paces. Starring for the Lionesses was Lucy Bronze, who is capped 29 times for England Ladies and currently plays for Manchester City WFC, alongside goalkeeper Karen Bardsley, her teammate for both club and country.

You can see how they got on here.

As the school girls celebrated playing against their footballing heroes, The FA and SSE announced the launch of the new Participation Programme which is set to massively increase the opportunities for girls around the country to play football.

The programme, which is currently open to WSL1, WSL2 and Women’s Premier League sides, will provide funding for existing football clubs who wish to create girls only coaching sessions and build new competitive playing squads for girls between the ages of 5 and 14. Significantly, the grant system will exclusively support girls only football to help increase girls only football provisions across the country. 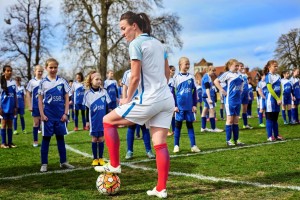 No way through! Lucy considers her options.

Describing the occasion, Lucy Bronze stated, ”Lining up against that number of girls is one of the most incredible sights I’ve ever experienced, not only as an England player but throughout my career! As footballers we want to inspire as many people as possible to play football and it was great to meet so many girls who love to play. I’m excited that through this new initiative, more girls around the country will be given the chance to play the game.”

To date, 34 clubs have successfully applied for the programme which will run as a pilot for the remainder of 2016. Applications are still being received and the programme will stay open to all clubs at all levels that are registered with County FA’s until May, with the ambition of engaging even more football teams in the scheme moving into 2017.

From Arsenal in the WSL1 through to Bradford City WFC in the Women’s Premier League, the clubs currently taking part in the scheme stretch across the UK, demonstrating the wide demand for improved girl’s only football provisions.

FA director of football participation and development, Kelly Simmons, said: “This is a fantastic initiative that will really make a difference in girls’ participation numbers. We know that our clubs provide an invaluable route to playing football for so many girls and this initiative will allow them to do even more good work in their communities.

Female football participation is one of our key areas of focus at the FA and this will help to drive participation rates even further.”

Alan Young, SSE Managing Director of Corporate Affairs, said: “Giving so many school girls get the chance to take on their heroes in what turned out to be such a one sided match epitomises the inclusive and fun nature of The SSE Women’s FA Cup.

Everyone at SSE is exceptionally proud to sponsor such an important competition and very excited about how everything is progressing. We’ve started to see the plans we’re making with The FA to grow the women’s game take shape and the Participation Programme is another huge step in ensuring girls have the best possible chance to get involved in the beautiful game – one of the main reasons we entered this partnership.”

To find out more about the work SSE are doing in women’s football, visit: www.SSE.co.uk/girls-united

Report courtesy of SSE via Synergy