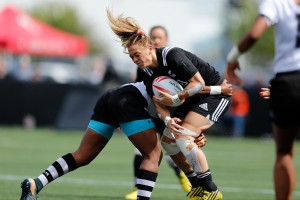 The girls in gold, who’ve won all three rounds of the series so far, topped Pool A after beating France, Brazil and Russia.

Reigning champions New Zealand eased past Fiji, USA and Spain in Pool B while hosts Canada finished top of Pool C after beating Japan, Ireland and England. The Canadians also managed not to concede a single point over their three games, which will give them extra confidence going into day two.

Australia will now play Spain in the opening quarter-final on day two in Langford, with New Zealand facing Russia in the next decider. Canada will play France in the third quarter final of the day, with USA taking on England afterwards. 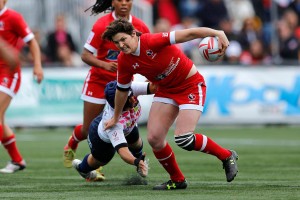 You can see all the results and fixtures here.

The fourth round of the HSBC World Rugby Women’s Sevens Series visited the home of Rugby Canada, following the third round in Atlanta, USA last week. The weather and the crowds both played their part in another great day of women’s rugby, with the usual mix of thrills, spills and top action on display.
The action continues from the  Westhills Stadium, Langford on Sunday, with all matches streamed live here as Australia take on Spain from 10.00am (GMT – 8).
Report/photos courtesy of World Rugby
Tags: Langford, rugby, Sevens