Eighteen of the best international women’s cricketers from across the world will play in the Kia Super League this summer, after the England and Wales Cricket Board (ECB) today announced which overseas players will appear in the inaugural edition of the competition.

Each of the six Kia Super League teams will field three overseas players in the round-robin T20 event in July and August, with the top performers from the recent ICC Women’s World Twenty20 tournament all set to be involved.

Sarah Coyte, Lancashire Thunder: “I’m really happy to hear that I will be playing for the Lancashire Thunder this summer.  It’s a great opportunity for me to develop as a player – in a new environment and in different conditions.” 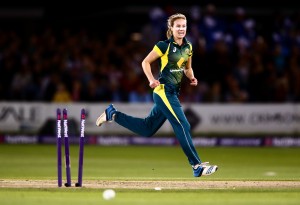 LOUGHBOROUGH LIGHTNING: The Lightning line-up will be bolstered by three of the most exciting all-rounders in the world, having signed New Zealand’s Sophie Devine,renowned for her powerful ball striking, in addition to Australia’s Ellyse Perry and South African Dane van Nierkerk – who are currently ranked as number one and two respectively in the ICC all-rounder player rankings.

Ellyse Perry, Loughborough Lightning: “Having the Kia Super League follow the Women’s Big Bash League in Australia speaks volumes for the brilliant effort that Cricket Australia and the ECB are putting in to continue to develop the women’s game.  To have two strong domestic competitions like this is only going to help this progression.”

SOUTHERN VIPERS: One of the most respected batsmen and captains in international women’s cricket, and Wisden’s leading women’s cricketer for 2015-2016, Suzie Bates, will be looking to make the Ageas Bowl her home this summer after signing for the Southern Vipers.  Bates will be joined by her White Ferns team-mate, Sara McGlashan, and Australia’s right-arm seamer, Megan Schutt.

Meg Lanning, Surrey Stars: “The interest in the Kia Super League and WBBL from overseas players demonstrates how valuable these new competitions are for the global development of women’s cricket – as international players it’s a really good time to be involved in the game.”

WESTERN STORM: ICC Women’s World Twenty20 player of the tournament, and captain of the victorious West Indies side, Stafanie Taylor, will bring a wealth of experience to the south-west this summer, having signed to play for Western Storm.  The Storm will also be able call on wicket-keeper Rachel Priest(New Zealand) behind the stumps and hard-hitting middle order batsmen Lizelle Lee (South Africa).

Rachel Priest, Western Storm: “It’s brilliant that these new high quality domestic women’s competitions are being established – following the Women’s Big Bash League in Australia last winter, the Kia Super League will really contribute to the ongoing professionalism of the game and the overall global development of women’s cricket.”

YORKSHIRE DIAMONDS: Fans of the Diamonds are in for a treat, as South Africa’s new-ball specialist Shabnim Ismailwill line up alongside Katherine Brunt to form a rapid new ball partnership.  Australia’s Beth Mooney will return to Headingley having played 50-over cricket for Yorkshire last summer, and will be joined by national team-mate, batsman Alex Blackwell.

Alex Blackwell, Yorkshire Diamonds: “It’s amazing to get an opportunity to play in the inaugural Kia Super League.  I’m sure it will be a wonderful showcase for the game – not just for inspiring young girls to play, but also to inspire boys to play too.”

Australia women’s captain and Surrey Stars batsman, Meg Lanning, said: “I’m really looking forward to playing in the Kia Super League.  It’s another huge step forward for the women’s game following on from the Women’s Big Bash League in Australia, and I can’t wait to get stuck in with the Surrey Stars once the tournament gets underway at the end of July.

“The interest in the Kia Super League and WBBL from overseas players demonstrates how valuable these new competitions are for the global development of women’s cricket – as international players it’s a really good time to be involved in the game.

“I’m sure the Kia Super League is going to be a great tournament, and it is a really good opportunity to get over to England and play some more cricket in English conditions.  It will also be great to play with Natalie Sciver again, she fitted in really nicely with our group at Melbourne Stars in the WBBL.  It will be a little bit strange for me not to be in the captaincy role, but I’m backing Nat to do a great job leading the side.”

ECB Director of England Women’s Cricket, Clare Connor, said: “One of the driving principles behind the establishment of the Kia Super League was to create a world class competition where the world’s best play.  Revealing who the overseas players will be today undoubtedly hits this mark.  The six teams are all brimming with talent, quality and the very best female cricketers from across the world; the Kia Super League is set to be a brilliant showcase for the women’s game.

“Over the last few weeks, we have worked extensively with the Kia Super League teams to select the overseas players from a pool of over 65 who expressed an interest in being involved this summer.  To see the final allocations in black and white is very exciting and I cannot wait to see these teams in action now.”

*Australian all-rounder Jess Jonassen was due to sign for Lancashire Thunder but has been ruled out from playing in the Kia Super League due to injury.

Overseas players will receive a standardised tournament participation fee, match fee for each game that they compete in, plus expenses throughout the preparation and competition phases.