Australia took a step closer to securing the HSBC World Rugby Women’s Sevens Series 2015/16 after defeating their rivals New Zealand at the third round of the series in Atlanta. 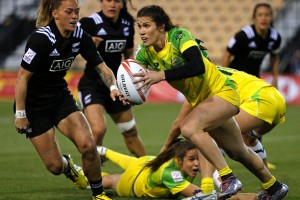 Despite both teams losing on day one, New Zealand and Australia bounced back on Saturday, returning to form as they progressed to the final at Kennesaw State University.

Charlotte Caslick and Emilee Cherry thundered over in the first 10 minutes and, despite two tries from Selica Winiata for New Zealand, Australia swept to victory to extend their lead at the top of the World Series table to 14 points.

Following tournament wins in Dubai and Sao Paulo, Tim Walsh’s team could be on course for a first ever series title win, when the season comes to an end in Clermont, France at the end of May. 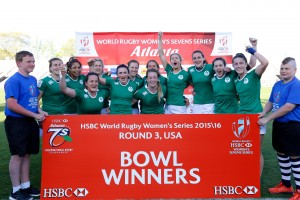 Earlier, the Plate final was won by USA, much to the delight of the loyal home fans in Fifth-Third Bank Stadium in Georgia, while Ireland claimed the Bowl final with a victory over a plucky Japan side. England beat a tired Canada side to claim third place at the tournament.

Despite being the most impressive side on day one, England lost out to New Zealand 24-19 in the first cup semi-final, with tries from Woodman, Goss, Tane and Stacey Waaka making the difference for the girls in black. Canada, who played some wonderful team rugby in Atlanta, were put to the sword by Australia in a 26-14 victory for the girls in gold.

Australia’s Emma Tonegato finished the weekend with a whopping 10 tries, including five touchdowns against Colombia on day one, but was typically modest about her achievement. 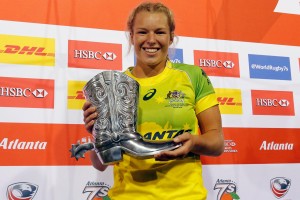 “I’m just the finisher and so they (team-mates) do all the hard work and I just have to do my job and cross the white line.”

England kicked off the second day of action at the Atlanta 7s with a 19-12 win against a valiant Russian side in the first Cup quarter-final, with Emily Scarratt again leading from the front, meriting a place in the weekend’s dream team. Fellow Dream Team recipient Ghislaine Landry then helped Canada thump Fiji, 29-0 in the second Cup quarter final.

New Zealand defeated England 24-19 in the first Cup semi-final while Canada, who played some wonderful team rugby, were put to the sword by Australia in a 26-14 victory for the girls in gold.

Elsewhere, series debutants Colombia, already assured of a spot at the Rio 2016 Games, ended the Atlanta 7s in last place after a 12-point defeat to Spain, but proved their worth in a thrilling, end-to-end 11th/12th place play-off.

The women’s series moves on to Canada where the fourth round of the series will be contested in Langford, BC next Saturday and Sunday, 16 and 17 April.