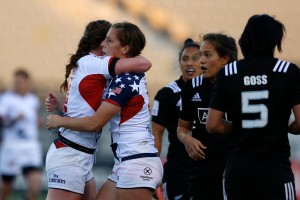 A strong England side set the pace on day one, with captain Emily Scarratt leading from the front to claim victories over Australia, Fiji and Colombia in Pool A.

Canada emerged top of a tough pool B, beating France, Russia and Ireland, while a weakened New Zealand team, missing regular finishers Huriana Manuel, Kayla McAlister and Gayle Broughton, finished second in their pool after the last-gasp loss to USA.

A last-minute try by Jessica Javelet saw the USA upset reigning champions New Zealand at the third round of the HSBC World Rugby Women’s Sevens Series in Atlanta on Friday.

The hosts beat the Kiwis 12-5 in the second-last match of the day at Kennesaw State University, much to the delight of the passionate home crowd in Atlanta.

It sets up four thrilling quarter-finals on Saturday, with England facing Russia, Canada taking on Fiji, USA are rewarded for their efforts with a quarter-final against Australia while France take on New Zealand.

The action continues from Kennesaw State University on Saturday, with all matches streamed live on worldrugby.org as England take on Russia in the first quarter final of the day from 12.30pm (GMT – 5)

Fixtures and results can be seen here.