The Hunslet Warriors ladies hosted Odsal Sedbergh Sirens in a much anticipated game for both sides. With both teams having a lot prove there was much more than bragging rights at stake. 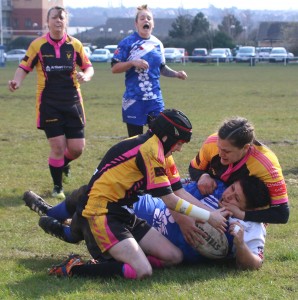 Hunslet, only having 12 eligible players for the encounter, opted to field the full 12 and have no substitutes. Odsal on the other hand came with a full quota of 17, but showing true sportsmanship agreed to field only 12 to even up the game.

Odsal won the toss and opted to kick, straight away Hunslet showed their determination and made it back into the Odsal half with the first drive. Completing the set and getting to kick Hunslet then tried to apply the pressure and force the mistake.

For the next ten minutes the game was a real tug of war, with both teams trying to take dominance.

With Hunslet in possession and driving for the sticks, a short pass to Annie May Shackleton saw her cross the line for the Warriors first try (conversion missed). 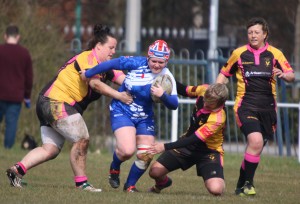 Odsal kicked off, applying pressure which paid off, with them getting the ball back. Probing the Warrior’s line they found a chink in the armour and Beth Greenwood crossed to even the score (conversion missed).

The Warriors then seemed to dominate, forcing penalties. Hunset worked a move from just inside their own half, opting to kick early. Hannah Hambly chased the kick, gaining possession 15 yards out, the Odsal full back managed to make a try saving tackle. Only for Anita Sharrock to scoot from dummy half and cross the line for Hunslet’s 2nd try (conversion kicked).

Hunslet once again carried on where they left off, with strong running from Jo Wilson, Kat Sharrock and Nikita Hunter, it was only a matter of time before more points were added to the tally. A 30 yard dash saw Megan Roberts score a wonderful try (conversion missed).

With half time fast approaching Hunslet’s concentration slipped and Odsal took full advantage. Showing good teamwork the ball went through several hands before they jinked back inside to score under the sticks (conversion kicked).

Coming back out, Odsal’s pep talk had obviously worked and they scored an early try in the corner to bring the scores back level (conversion kicked).

Hunslet were now clearly tiring, with having no subs the game starting to take its toll. The Warrior resolve held firm and guided by their captain, Gail Johnson.  With sheer determination Kat Sharrock barged through the Odsal defence to score (conversion kicked).

The second half was proving to be real battle now, with neither side being able to take the upper hand. Piggy back penalties saw Hunslet on the Odsal 10m line and with a beautiful flat pass Gail Johnson put Nikita Hunter over for a memorable try (conversion kicked).

Odsal now threw everything into the attack, knocking on a couple of times close to the line to hand possession back to Hunslet. Odsal’s determination never faltered, and with a play that saw the best move of the match, a lovely inside pass back onto a forward, Odsal scored again.

This was a very commendable performance from both sides, either team could have picked up the points from this match but the home side came out on top.