Following the professional athlete status announcement in February 2016 for Welsh Rugby Union player Sian Williams, a SAC in the Royal Air Force, the RAF has now signed 2 players, from the England RFU set up, to join the RAF Reserves.  Amy Cokayne, a hooker in the England Senior Squad and key player in the 2016 Six Nations, and Lucy Nye, a scrum-half for the England U20s squad, have both joined the RAF Police Reserves as part of 256 Sqn at RAF Cosford. 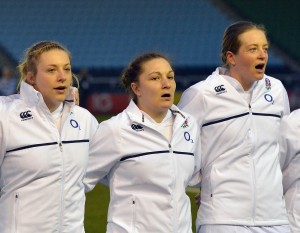 Amy comes from a military background with her Dad starting in the British Army and joining the New Zealand Air Force, where Amy learnt a lot of her rugby skills. She started playing at 5 with the boys and at 13 moved into women’s rugby.  New Zealand had a massive influence on her rugby, but in 2014 made the decision to move back to try and play for England. She got her first cap in Six Nations in 2015 against Italy. Playing for Lichfield she studies sports science at Loughborough University.

Amy said: “My dad is in the RAF; I really enjoy the lifestyle and the opportunities it can give you, meeting new people going new places and of course the sport. I know quite a lot of the girls(RAF) from Lichfield rugby and speaking to them about their different jobs made me choose the Police. I’ve always had a real fascination with criminology and police so it was quite an easy option. Main reason for joining the reserves now because I want to get a taste for it to see if it really is what I want to do after university, but it is the plan to join full time in the future.” 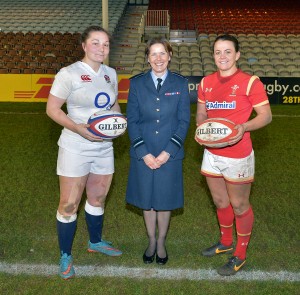 Lucy, also playing at Lichfield and studying sports science at Loughborough University, started playing rugby at 12 years old. At 16 she moved away from her home in Exeter to go to Hartpury College to be part of the Advanced Apprenticeship in Sporting Excellence in Women’s Rugby. Starting at scrum-half for the last two England U20s games against France, Lucy is a rising star.

Lucy: “I’ve always been interested in being part of the police whether it was civilian or military. I think joining the reserves is a good insight to what my future career could entail. I also like the structure and discipline that it takes to become an RAF reservist.  I’ve always been interested in the roles of a police officer and been fascinated from a young age. I also have a lot of family members involved in the police force.”

“We are extremely fortunate to be able to call on the considerable playing talents of both RAF Reservists Amy Cokayne and Lucy Nye. They are both committed and dedicated sportswomen and have played at a very high standard, with Amy already a full England international and Lucy representing England U20. Amy is a powerful ball carrier and a forceful presence at the scrimmage and breakdown whilst Lucy is a typical dynamic scrum half who passes and kicks extremely well and also tightly controls her forward pack. Their selection highlights that elite sport can be played concurrent with an RAF career and we hope to recruit other players going forward.”

Ian Cokayne, a Flight Lieutenant in the RAF, and RAF Women’s Rugby Union Forwards Coach said: “While common values such as self discipline, respect, integrity and excellence make the RAF a great career choice for sportsmen and women, it’s still a big decision to join up; especially when studying at University and playing International sport. However, Lucy and Amy are very capable and I am sure they will both be hugely successful. I feel very proud of both of them for their decision to join the RAF Reserves, and I wish them well as they embark on a very rewarding career.”

The RAF this week take on their most challenging game of the season in the first fixture of the Inter-Services against the British Army. It will be a clash of international prowess with the Army boasting 3 players, Bianca Dawson (England), Bethan Dainton (Wales), Gemma Rowlands (Wales) and the RAF with Sian Williams (Wales), Amy Cokayne (England), Lucy Nye (England U20s).  Not to mention the numerous Premiership and Championship players that make up most of the other numbers for the two squads.  It is certainly set up to be a spectacle.