England Women’s dream of landing the 2016 Six Nations Grand Slam ended in heartbreak on Friday night when the side lost 17-12 to France in a winner-takes-all decider. 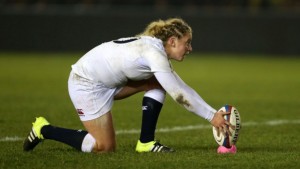 The French walked away from the Stade de la Rabine, Vannes, as Six Nations champions after holding off England in a hard fought victory. England will finish second in the tournament, although the remaining nations have yet to play their final games.

England led 7-5 at the break after Lydia Thompson broke four tackles to go over in the corner with Amber Reed sending over the conversion. France responded through captain Gaelle Mignot who bundled over from close range.

The hosts had the lead for the first time as a driving maul took Audrey Forlani over and Camille Cabalou nailed the conversion. England drew level at 12-12 after Tamara Taylor powered over but Reed’s conversion hit the post.

With 10 minutes left Mignot had her second try with another drive from a French line-out taking them over for 17-12. England had late pressure but France held out for victory to win the title.

England headed into the game looking to win their first Six Nations since 2012. Their 2016 campaign marked a huge turnaround from last year’s tournament which saw a relatively inexperienced side finish fourth.

Lead Coach Scott Bemand said: “We knew this would be a tough game tonight but it is hard to swallow. The girls have done everything that was asked of them – they have shown character and commitment. We tried to play our brand against a really tough French team, in front of a crowd of 10,000 people.

“We have to regroup, go back and this team is going to continue to evolve and get better. We have a summer tour, we’re going to dust ourselves off and get back on the rails for that. Tonight was a genuine test match.”