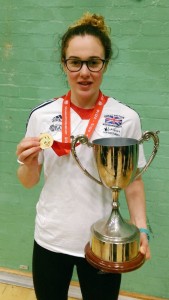 Eilidh Prise with her medal and trophy (Photo: Matchtight)

The Mathematics student, supported by a Bill Whiteley Scholarship, was the top performer in the fencing, swimming and combined run/shoot as she finished with 5,224 points in total – nearly 1,000 more than her nearest opponent.

The only discipline Prise didn’t come top in was the ride, where she picked up 28 jump penalties.

Fellow University of Bath student James Harper was seventh overall in the men’s competition, with his best individual performance coming in the pool where he set the third-fastest swim time of 2:10.75.