On her 21st birthday, Nozomi Okuhara became Japan’s first singles’ winner since 1977 after an extraordinary women’s singles final against Wang Shixian of China.

Okuhara prevailed 21-11, 16-21, 21-19 in a 99-minute marathon, the second longest match of the tournament, aided by a conduct point against Wang late in the decider for time-wasting. 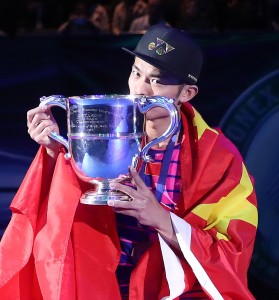 Okuhara said: “It was obviously a very tense atmosphere and I think it was mainly due to a strange timing issue. I was lucky I wasn’t cautioned.”

Lin Dan of China became only the fourth player to win the men’s singles title six times when he beat compatriot Tian Houwei at the YONEX All England Open Badminton Championships on Sunday.

Lin was at his dominating best in an all-Chinese final as he beat Tian 21-9, 21-10 in a one-sided contest at a sell-out Barclaycard Arena.

“This is my ninth All-England final, my sixth title and my best performance of the week,” said Lin, who will attempt to win a third Olympic title later this year.

In the mixed doubles, eighth-seeded Praveen Jordan and Debby Susanto beat Denmark’s Joachim Nielsen and Christinna Pederson 21-12, 21-17 as Indonesia won their fourth title in five years in the event following an impressive display.

The surprise of the week, Russia’s European champions beat Hiroyuki Endo and Kenichi Hayakawa 21-23, 21-18, 21-16, the Japanese pair losing their third All England final.