Ever since first seeing cycling on the TV I have wanted to go to the Velodrome and yesterday I got my wish with a visit to the World Championships at Lee Valley. 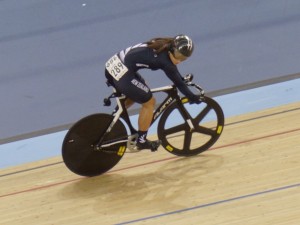 The first surprise was the air lock system at the door, to keep the stadium at a constant temperature.  The second that struck immediately is that the bank that seems steep on the TV seems extraordinarily steep up close.  I heard the comedian Huw Dennis, who is doing a cycling event for Sport Relief, say that it is like cycling in a bath tub – and the analogy is about right!  My admiration for the bravery and skill of the cyclists increased considerably.

First on the track, one of the most famous women cyclists of all, Anna Meares racing compatriot Stephanie Morton in the women’s sprint, a famous game of cat and mouse, where the riders show amazing skill holding their bikes on the track at almost a standstill and then racing off with incredible bursts of speed.  We were not there for the final but were surprised to see that Meares ended in fourth place with Kristina Vogel beating her in the battle for a bronze medal.  The gold and silver were taken by Chinese cyclists Tianshi Zhong and Lin Junhong.

The next impressive thing about day is that the different events continue seamlessly, as one lot of riders come off the track those taking place in the next are all ready to go, no unnecessary delays – even after a couple of crashes, people were out very quickly to make sure there was no damage to the track and to clear any detritus away.

The next treat in store was to be able to see Laura Trott take part in two of her Omnium events, the time trial and the flying lap – my father in law sitting beside me, kept saying “I can’t believe she’s so small” and tiny she may be but if ever an athlete had the heart of a lion it would be Laura Trott!  She put in a brilliant display over the two events and the crowd duly showed both its admiration and partisan pride!  The only disappointment would be not actually being there to cheer her onto another gold medal.  Laura picked up the Gold medal having increased her lead from 12 points to 18 after the final event, Laurie Berthon of France took the silver and Sarah Hamm of the USA bronze. 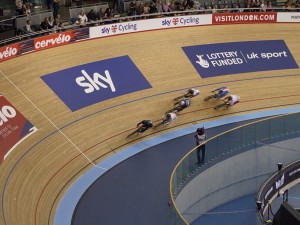 The other event we saw was several heats of the Keirin featuring our own Jason Kenny, these events featured two crashes on the track the first involving two riders in Kenny’s heat and I was waiting for him to fall victim too, since it seemed to happen all around him and when you see how fast they ride and how close together, the only surprise is that there aren’t more clashes. It’s a brutal race but very exciting.  I should add that each of the cyclists who fell were up on their feet again as soon as they could disengage from their bikes and I don’t believe there was any serious injury.

Unfortunately Jason Kenny was unable to finish in the medals which were taken by Joachim Ellers of Germany (gold), Edward Dawkins of New Zealand (silver) and Mohd Azizulhasni bin Awang of Malaysia (bronze).

The atmosphere in the arena was incredible and whenever there was a GB rider on the track the sound rose several notches – I can only imagine what it was like in the afternoon when both Mark Cavendish and Bradley Wiggins were competing in the Madison.

So, how was my first experience in the Velodrome – awesome!  Would I go back for more – in a heartbeat and I’d definitely recommend it to anyone else too.  I may not understand the complexities of all the different races, but the commentator does a great job of explaining who is doing what, so you at least know what’s going on at any given time!

Finally a thank you to my family, for including me in the Christmas present treat and to my brother in law for the great photos.