Team Bath Netball moved level on points with Manchester Thunder and Hertfordshire Mavericks at the top of the Vitality Netball Superleague table with a convincing 60-44 win over fellow play-off contenders Loughborough Lightning on Friday. 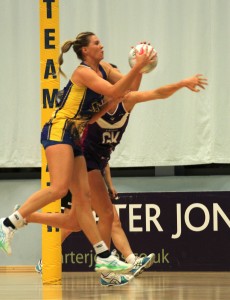 As snow fell outside the University of Bath Sports Training Village, Team Bath turned up the heat inside it with a confident performance thoroughly enjoyed by another capacity crowd.

The result leaves Team Bath six points clear of fifth-placed Lightning at the midway point of the season but while Head Coach Anna Stembridge was pleased with the win and the performance, she knows there is still a lot of work ahead.

“I was asked before the game whether I though it was a must-win match but, as far as I’m concerned, every game is must-win,” she said.

“The first half of the season is over and we are well placed but we cannot rest on our laurels.

“Consistency was the key for us tonight. We knew Lightning were a force to be reckoned with and we did not underestimate them. We played smart, disciplined netball and looked a lot more connected in defence.

“We started well, as we did against Mavericks on Monday, but unlike then we built through the game. Lightning came back at us in the first quarter – it was a really well contested game throughout – but we were still up at the end of it and we went on to win all four quarters, which was pleasing.” 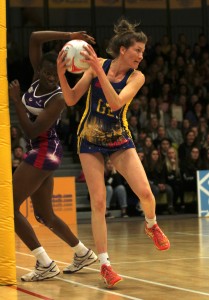 After their home defeat to Mavericks on Monday, Team Bath were looking for a positive start to this match – sponsored by Warminster School – and they got it as Rachel Shaw and Lenize Potgieter quickly fired them into a 3-0 lead.

A couple of mistakes allowed Lightning to level at 4-4 but Team Bath – roared on by a 1,600-strong crowd – were on the front foot and quickly regained a four-goal advantage.

Some sparkling link-up play in mid-court from Mia Ritchie, Jo Vann and Shaw ensured the chances kept coming and Team Bath found themselves with a 13-7 lead before Lightning hit back to close the deficit to 15-13 at the end of a pulsating first quarter.

The second period, by contrast, was a slow burner as just four goals were scored in a scrappy opening five minutes. Two of them were scored by Shaw, who then began to find the net with unerring accuracy as Team Bath clicked back into gear.

One nerveless finish from Shaw had the home bench and fans roaring with delight as Team Bath began to turn the screw, stretching their lead to ten points.Some fantastic defensive pressure restricted Lightning’s chances at the other end and the home side held a commanding 29-20 advantage at half-time.

Lightning made wholesale changes to their team for the third period, with just shooter Peace Proscovia and wing-attack Hannah Joseph remaining in their starting positions.

It looked like having a positive effect when they pulled three quickfire goals back but Team Bath were soon back in the driving seat, with the ruthless Potgieter hardly missing a shot.

At the other end, her fellow South African Karla Mostert was having an outstanding game in defence alongside Eboni Beckford-Chambers as Team Bath won the period 18-13.

Lightning made four made changes for the final period, with former Team Bath shooter Kadeen Corbin coming off the bench to remind the home crowd of her fine finishing.

But the result was never in question and a Team Bath side that remained unchanged throughout comfortably saw out a 60-44 victory.

Next up for Team Bath is a trip to defending champions Surrey Storm on Saturday, March 12 before they return to the Sports Training Village on Friday, March 18 to face a Yorkshire Jets side captained by Stacey Francis.

Tickets are available for that game, and the Easter Monday home match against Celtic Dragons, by visiting the ticket line here  or calling 0844 888 4412.

Player of the match: Karla Mostert.