England Hockey and Investec have announced Investec’s extension as Principal Partner of Great Britain and England Hockey’s women’s game through to the 2020 Tokyo Olympics. 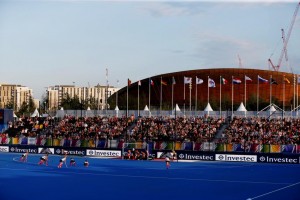 Launched in July 2011, the partnership has delivered great success for both parties during a period which has seen women’s hockey scale new heights. Medals at several major championships, including a bronze at London 2012 and a gold at last summer’s Unibet EuroHockey Championships, have been complimented by an upsurge in participation.  A 77% increase in junior girls club players, allied with growth across other age groups, has led to a 39% overall increase in women’s club participation since 2011.

Investec’s Richard Harris said: “Hockey is a sport that reflects our values and witnessing the passion, skill and commitment of the elite players over the last four years has been a great privilege. I am delighted that our support has enabled England Hockey to put on more events, helping to showcase the sport and its athletes, and engage a wider audience with the sport. We look forward to working with England Hockey to take hockey even further over the next four years.”

The four year extension of the partnership will boost Great Britain and England Hockey in continuing to deliver international success, grow the visibility of the game and inspire more people to take part. The agreement maintains Investec’s position as Principal Partner of the Great Britain and England Women’s teams, Women’s Hockey League, Schools Championships for girls, and Investec London Cup – an international invitational tournament.

It is a very exciting period for women’s hockey with England Hockey hosting world level events such as the Women’s Hockey Champions Trophy this June and the Women’s Hockey World Cup in 2018, all at the new home of hockey – Lee Valley Hockey and Tennis Centre on Queen Elizabeth Olympic Park.

England Hockey Chief Executive Sally Munday said “Investec’s support of women’s hockey has been extraordinary.  They have helped us take our work at all levels of the game significantly further forward, and we are much closer to our vision of a ‘Nation Where Hockey Matters’ than in 2011. With the women’s Hockey Champions Trophy this summer and the Hockey World Cup in 2018 we have a fantastic opportunity to continue our work with Investec and engage even more people in the women’s game.”

You can share and view the Investec #OurJourney video  here and here.