University of Bath sporting scholar Sydney Gregson has been named in the England Women U20 starting XV for Saturday’s rugby international against France.

The Sport Performance student, who is supported by a Trendell Sports Scholarship, will start at full-back for the match at Esher RFC (2pm).

Three of Gregson’s University of Bath team-mates are on the bench for England – Jessie Hood, Chantelle Miell and Lottie Holland. 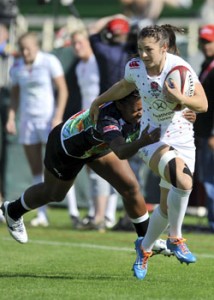 All four, who play their club rugby for Bristol RFC, are supported by the Sport England Talented Athlete Scholarship Scheme (TASS) and the University’s Dual Career programme.

Saturday will mark the first of two games against France this month, with the second away at Chantilly RFC on Saturday, March 19.

Tickets for Saturday’s match are available via EsherRugby.com.

Meanwhile, University of Bath graduate Amy Wilson Hardy will have another chance to stake her claim for a Rio 2016 Olympic Games place after being named in the British Women’s Sevens squad for next week’s Vancouver Rugby Festival in Canada.

Wilson Hardy, who studied Engineering, will meet up with the squad after this week’s USA Sevens Invitational Tournament in Las Vegas.