Manchester Thunder head into a crucial weekend of the season as they face both Hertfordshire Mavericks and Surrey Storm within three days. 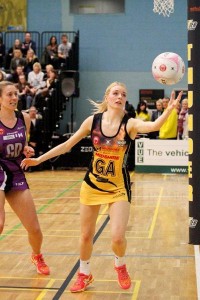 Results from these two games will say plenty about their credentials for re-taking the Superleague crown they gave up to Storm in 2015.

The Black and Yellows face the Mavericks – the only other unbeaten side in the league – first up on Saturday in round five.

The game comes almost two weeks after they came through a bruising away encounter against Loughborough Lightning and Thunder will face a revitalised Mavericks in Hertfordshire.

With time to recharge their batteries, coach Dan Ryan expects his squad to be ready for whatever Mavericks throw at them, especially his bench players.

“We’ve got a really deep 12 and now is not the time to be locking in a starting seven,” he said, “I have full faith in anyone that I put on court and one of the main strengths of our team is the versatility of our line-up.

“I expect Mavericks to do their homework on us, just like Lightning did – it will be a very tough game. The exciting thing is there is plenty of room for improvement in all departments of our game.”

A victory will move Thunder clear at the top of the Vitality Superleague table and provide them with a timely confidence boost ahead of facing the defending champions at the Thunderdome two days later, in front of the Sky Sports cameras.