The National Basketball Performance Centre at Belle Vue was bouncing after a pulsating and gutsy comeback from the home side who had found themselves trailing by ten points inside the last quarter. 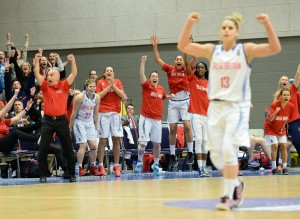 Both teams had shared the spoils in the opening quarter until Montenegro enjoyed the better of the closing stages and posted a late run to move 23-17 – helped by Jelena Dubljevic, fresh from having penned a WNBA deal with the Los Angeles Sparks.

Great Britain came storming back at the start of the second period and it had the visitors calling a quick time-out after GB posted a dazzling 12-0 run, which saw some terrific team basketball.

With Jo Leedham leading by example, Ella Clark continuing her rich vein of form and some brilliant ball movement, GB surged 29-23 ahead. Only Montenegro hit back and squeezed out a 35-33 advantage at the interval to set up the second-half beautifully.

The intense tussle continued, and it looked all over for GB when Montenegro posted powerful run either side of the third and fourth quarter break to move 58-48 in front.

However, having been asked a serious question by their opponents, there was an emphatic response in the form of eleven consecutive points, as incredibly Leedham gave GB the lead.

The good work continued and another superb burst put them 64-60 ahead, this time Leedham scoring again after a go-ahead triple from Rachael Vanderwal.

As Montenegro looked for a response, it was a killer blow from Ella Clark that effectively sealed the deal. She hit a massive clutch three-pointer from the corner with the shot clock ticking down – that made it 67-62 and GB never looked back as they held on for a famous win.

Leedham poured in a fabulous 28 points and Clark secured her second double-double of the week with 15 points and 12 rebounds.

The victory lifts GB to 2-2 in Group C, along with Wednesday night’s opponents – although Italy are in pole position after moving to 4-0 with a win in Albania.

The full statistics for the game can be found HERE.

This stunning victory followed a morale boosting win against Albania on Saturday, and a case of third time lucky for Great Britain senior women as they racked up a first success of their FIBA EuroBasket Women 2017 qualifying campaign after strolling to a 122-36 victory.

In the first competitive game to be played at the terrific new National Basketball Performance Centre in Belle Vue Sports Village, a further fresh page was turned with Mollie Campbell being handed a senior début.

There was also a maiden success at the helm for Head Coach Jose Maria Buceta, as the hosts wowed the crowd in Manchester with a blistering start against the Group C underdogs.

Handed a rare starting role, Ella Clark made the most of the opportunity with seven early points as GB blasted their way into a 22-4 advantage – having initially inked the first 12 points of the contest without reply.

The dominance of the home side continued and leading 35-9 at the end of the opening quarter, it was the same story in the second quarter as GB continued to run riot. One of the most notable moments came when Leicester Riders’ forward Campbell took her first footsteps on the hardwood as a senior player.

While the game was effectively done and dusted by the time the players hit the locker room at the interval with a 63-22 lead, there was still much to enthuse over for the appreciative and noisy home crowd, who continued to give great vocal backing when the action resumed.

Not least when Campbell scored her first senior basket – one which also meant that every GB player registered a basket during the victory in what was very much a rounded team-effort.

Jo Leedham top scored with 22 points, eight rebounds and six assists, while Ella Clark put up a superb 15 point and 17 rebound double-double. The full stats from the game are available HERE.

Next up for GB is an away clash against Italy on 19 November following by Albania away on 23 November.