Junior World Champion Francesca Summers has qualified for the women’s final of the first World Cup of the year in Cairo. She will now compete against some of the world’s best pentathletes on Friday, including current World Champion Lena Shoneborn and 2015 European silver-medallist Elodie Clouvel. 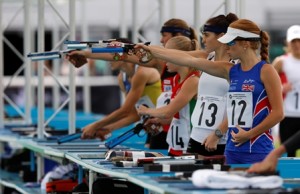 It was Summers’ outstanding fencing which put her in prime position for qualification. From the 88 pentathletes competing, the 20-year-old scored the most hits of the day with 21 victories and just 7 defeats. The Olympic hopeful also performed well in the pool, securing a swim time of 2:19.43 and ran the combined event in 13:59.99. After starting the final event with a six second handicap she dropped one position to finish qualification Group C in 3rd place, securing automatic qualification.

Elsewhere in Group C, Budapest International bronze medallist Joanna Muir came heartbreakingly close to qualifying through time. She started the day off well with a 6th place finish in the pool after securing a time of 2:15.45, before scoring 11 victories in the fence. Muir went into the combined event in 18th position, with a 74 second handicap but pulled back to finish the group in 12th place, missing a qualification position by three places.

Pipes had a strong start to the day in the pool, clocking a time of 2:17.41 before scoring 15 victories in the fencing salle. She began the combined event in 10th place with a handicap of 33 seconds but struggled to maintain her position throughout the 3200m course.