Netballers have united to do their part for Sport Relief and in the process have also smashed a Guinness World Record! 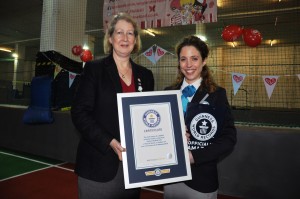 To celebrate the 90th anniversary of England Netball, 1,322 netballers participated in the ‘Largest Ever Netball Exhibition’ match which lasted for 90 hours at the Play On Sports Centre in Whitechapel, London at the weekend.

Each team who entered the match contributed a donation to Sport Relief and the total raised is expected to exceed the £20,000 mark.

England Netball CEO Joanna Adams (pictured above), said: “This has been a fantastic way for our National Governing Body to celebrate turning 90. Once again our Netball Family has proven how inspiring, generous and dedicated they are.

“We are thrilled to be a supporting partner of Sport Relief and are delighted that netball has played its part to make a difference to people living incredibly tough lives, both here at home in the UK and across the world’s poorest communities.

“Netball has grown so much since we started the journey in 1926 and we are tremendously excited about what the future holds with so many fabulous projects and plans on the horizon.”

Comic Relief Chief Executive Officer, Kevin Cahill, added: “We’re very proud to be working with England Netball for Sport Relief and it’s been great to see so many netball players and fans from around the UK get involved in this record breaking event. This is exactly what Sport Relief is all about, bringing the entire nation together to get active, raise cash and change lives.”

England Netball is still encouraging those who are inspired to show their support by donating via its official Sport Relief giving page.

Sport Relief is back from Friday 18th to Sunday 20th March and there are more ways than ever for you to take part, change lives and feel proud. To find out more about Sport Relief or to enter the Sainsbury’s Sport Relief Games visit Sportrelief.com.