Fans who turned up to see the Chelsea Elite Development Squad’s league game against Watford EDS at Berkhamsted FC yesterday were given an unexpected treat as new signings Jade Bailey and Bethany England took to the field for their first game for the blues, and both Jade and Bethany played the full 90 minutes. 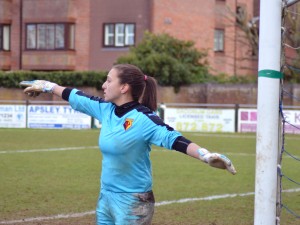 The match was extremely competitive and hard fought from both sides, with several near misses both ends, most notably from Chelsea’s Laura Pickett who was denied by the crossbar in the second half.

Deger Zekai, Watford’s goalkeeper produced a stunning performance throughout the game, pulling off some great saves right up to the last minute. 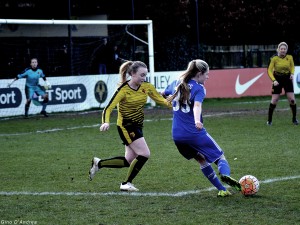 With a few minutes left to play, Zoe Cross crossed the ball Bethany England, who everyone thought had beaten the keeper with a desperate sliding half volley. Another great save from the Watford keeper that kept her team in the game.

Undoubtedly Watford were not expected to gain anything from this fixture so at the end of the 90 minutes, the ref’s blast of the whistle resulted in loud cheering and clapping from the Watford bench and their fans, Watford having gained a valuable point against Chelsea with a 0-0 draw.

The game also saw the debut of Miriaél Taylor for Chelsea Ladies who, having stepped up from the U17s, earned herself the player of the match award (voted for by the fans) with a solid and robust performance.