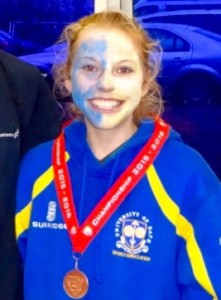 The Sports & Social Sciences student, who is supported by a Trendell Sports Scholarship, was making her first BUCS appearance for the University of Bath and wore blue and gold face paint to mark the occasion.

And she produced a battling performance at a very wet and windy Plock Court to finish third out of 583 runners behind University of Birmingham athletes Pippa Woolven – a Glasgow 2014 Commonwealth Games steeplechaser – and Rebecca Murray in 21:30.

In her RunWithASmile blog, Nesbitt wrote: “A tough battle with some super speedy girls left my legs feeling like jelly as I crossed the finish line. What a great experience, though, and it was even better to have such amazing support around the course.

“Finishing in third was an added bonus and helped to numb the pain from the rain and wind.”

Nesbitt – who helped GB win U23 team gold at the European Cross-Country Championships in December – can now look forward to the World University Championships, taking place in Cassino, Italy on March 12.

You can find Jenny’s blog here