Yesterday Hunslet Warriors travelled across Yorkshire to play the ladies of Hull.

With the Warriors bringing in a couple of new signings (Sherryl Cole and Chloe Brown) and having players returning from injury ( Kat Sharrock – return after broken finger and Megan Davies – return after broken nose), Hunslet were hoping to put on a good display. With both sides fielding a big pack you thought that this would be a battle of the forwards.

Hunslet kicked off, and Hull put together some good attacking plays. Hunslet defended well and when they had ball in hand were equal to the home sides advances. The game was toing and froing until eventually Hull found a hole in the armour and crossed the line. Conversion missed 4-0. 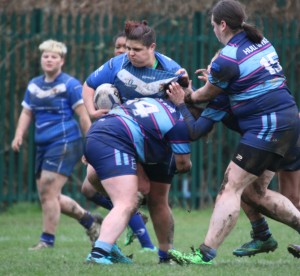 Hunslet consolidated and after forcing a few mistakes crossed the line themselves with Chloe Brown. Conversion missed. Score 4-4

Hull once again pushed for the line, forcing Hunslet on the back foot. Gaining possession in their 20 Hunslet tried working the ball out only to turn it over due to pressure from Hull. Hull capitalised on the mistake and crossed the line once again. Conversion missed.

After some wise words from the coaches Hunslet came out in the 2nd half with more determination, Hull did their best to keep them out but with a very clever cross field kick from Gail Johnson on the last tackle Chloe Brown once again found herself over the line. Conversion just wide Score 8-8 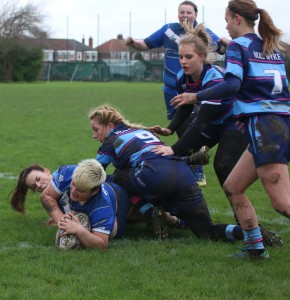 The game could now go either way. It was a battle both in attack as in defence. Some fancy footwork and Hull crossed in the corner. Conversion missed. Score 12-8.

With the game hanging in the balance, Hunslet pressed once again. The ball going through several pairs of hands Chloe Brown once again had only the try line in her sights. Powering over she brought the game back to writhing Hunslet’s grasp. Conversion once again only slightly wide. Score 12-12.

With only minutes left both teams gave their all, but neither could take a firm hold. A well fought battle by 33 gladiators, every one of them able to hold their heads high.