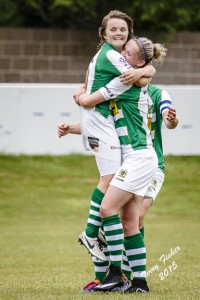 Midfielder Ellie Curson has been announced as the club’s first team captain for the forthcoming 2016 season.

Curson joined in June 2014 and has gone on to become an integral part of the team, signing a new one-year contract at the end of last season.

The Welsh international was named as 2015 ‘Manager’s Player of the Year’ and Jamie Sherwood spoke of the respect the 21 year old has within the squad.

“I am delighted to have Ellie leading the group this season.” The manager continued: “She is a straight talking, driven and passionate player and I feel she can support the players and help us all achieve even more this season.

“Ellie has been given the opportunity by the players as we, with our sports psych staff at ‘Mindsport’, have been working towards a player driven choice of captain. The group have chosen a worthy candidate and someone who will wear the armband with pride.

“I feel it’s important the group are as tight as possible this year as this unity will give us a stronger chance of pushing the club forward.

“The coaching staff and myself are looking forward to working with Ellie and ensuring we support not only her but the group of players further, to maximise their potential over the next 9 months.”

Glovers fans can see Curson lead out the team for the first time in this Sunday’s SSE FA Women’s Cup tie at home to Bradford City Women. Kick off is 2.00pm at The Jones Stadium, Sherborne. Ticket details here.