Manchester Thunder will be looking to build on their opening win of the season in Birmingham when they take on Celtic Dragons at the Thunderdome on Saturday.

The Black and Yellows ran out relatively comfortable winners over Team Northumbria in the inaugural Superleague Super Saturday event, and will hope to put on a solid performance in front of their home fans in round two.

However they will be without experienced keeper Kerry Almond, who missed the opening 59-43 victory, as she is currently on the sidelines through injury. 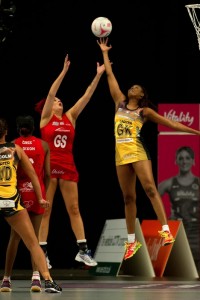 Fortunately Jamaican import Malysha Kelly (above and left) was a more than a capable stand-in for Almond, impressing on her debut for Thunder.

Fellow new signings – New Zealand international Liana Leota, who won player of the match against Northumbria on debut – and England star Natalie Haythornthwaite, are also set to make their home Superleague bow in front of the notoriously loud Thunder fans.

“Malysha and Liana had great débuts for us. Liana put in some beautiful balls to the shooters against Northumbria and I hope that continues throughout the season.

“Malysha was outstanding and very consistent – she will do quite a serviceable job back there at keeper for us in the Superleague. 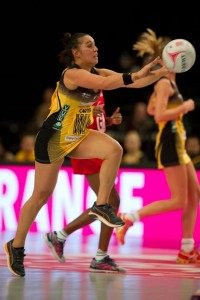 “I’m hoping to get the whole squad out there on Saturday, including Amy Clinton. Her time will come.”

Celtic Dragons head to Manchester on the back of a heavy loss to Hertfordshire Mavericks in their opening fixture at the Genting Arena.

The Cardiff-based outfit started poorly but improved significantly in the middle quarters of the game. But they were unable to get back in touch with Mavericks, who took the win 39-60.

Thunder will be confident of a victory at the weekend, but will be wary of a strong Dragons centre court, which includes Welsh international Kyra Jones.