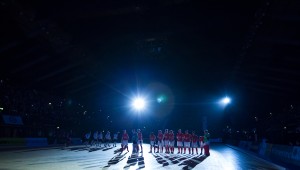 Canterbury and East Grinstead get ready for the mens final. (photo: Ravi Ghowry)

BT Sport and England Hockey are pleased to announce that the Super 6s Finals Day – the climax of England’s domestic indoor hockey season at the SSE Arena, Wembley, will be shown live on BT Sport on Sunday 31 January.

The Women’s and Men’s Semi-finals and Finals will all be shown live across BT Sport’s channels.  Super 6s offers a fantastic spectacle of end-to-end action and an abundance of goals – over 50 on the day in previous years – and as such is a very entertaining prospect for BT Sport’s viewers.

The competing club teams feature international stars such as Laura Unsworth and Simon Mantell and the event also offers an opportunity for fans to meet international players in autograph signing sessions, which is always a focus at hockey events to inspire young followers. In the men’s competition, Canterbury, Reading and Sevenoaks will be looking to end East Grinstead’s indoor dominance of recent years; while in the women’s competition last year’s Champions Bowdon Hightown will be defending their crown against Canterbury, East Grinstead and University of Birmingham.

BT Sport recently showed the men’s and women’s World League competitions from India and Argentina respectively, and this coverage is another exciting part of the continued effort to show more domestic and international hockey to audiences in the UK.

Simon Green, head of BT Sport, said: “BT Sport thoroughly enjoyed bringing hockey fans the World League Finals last year. And through our coverage of the Super 6s, we aim to help generate a real buzz around English hockey as the season builds to an end.”

England Hockey’s Commercial Director Jonathan Cockcroft commented: “Following BT Sport’s broadcast of the World League Finals last year we are delighted that England Hockey’s show-piece indoor finals, the Super 6s, will be televised.  Fans will be able to enjoy six action-packed matches on 31 January, live from the SSE Arena, Wembley. Television coverage of our game is critical for the growth of the sport and we hope that those who watch the fantastic coverage will be inspired to pick up a stick or come to a future England Hockey event.”

Tickets for the Super 6s are still available at here.