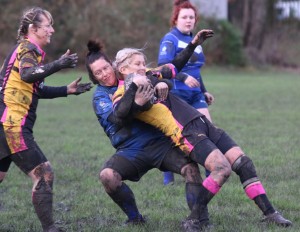 With much anticipation the Hunslet Warriors travelled over to Odsal Sirens hoping to keep the winning run going in the league competition. Hunslet, had to put a patched up side together and just managed to scrape together 13 combatants for today’s battle. With the pitch on an obvious slope, and conditions dodgy at best both teams knew this wasn’t going to be an easy win.

Hunslet won the toss and opted to play up hill. Hunslet showed great structure in the first 5 and applied all the pressure on Odsal, forcing piggy back penalties and getting themselves in a scoring opportunity. Working from dummy half the Warriors hooker grubber kicked for the corner, only for it to go dead. Odsal came out determined to work down field, but with a knock on in only the 2nd tackle, Hunslet once again found themselves on Odsal’s 40yard line. Quickly making up the ground on the 4th tackle the Gail, the Hunslet 9, put in another well weighted kick. This time Odsal cleared. Result Odsal drop out. Odsal galvanised and with some good rugby, were soon camped on the Hunslet 20-yard line. Working the ball right, and with 2 drives from dummy half Odsal scored in the corner. Conversion missed. Score 4-0. 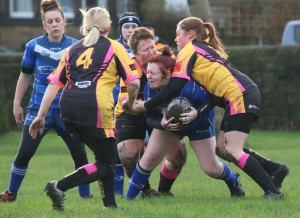 With Hunslet now struggling to get out of their half it was all they could do to stop the Odsal onslaught. Time and again Odsal attacked, time and again Hunslet thwarted their advance. Until eventually with a well worked play down the right, the ball going through several pairs of hands Odsal once again scored. Conversion missed.

Having the time to patch players up and offer some advice the Hunslet side took to the field. Now playing downhill they only hoped that the tide of fortune would change. Just like in the 1st half, Odsal took the offensive and soon looked like scoring again. A consolidated Hunslet defence kept them out, but for the first 5 mins it as all Odsal. Hunslet regrouped and pushed on down the park, with the help of a penalty they soon had the try line in sight. With 2 drives out of 3 balls Jo Wilson found herself over the line just to the left of the sticks. The team were ecstatic and the lift was just what they needed. Conversion successful by Nikita Hunter. Score 8-6. 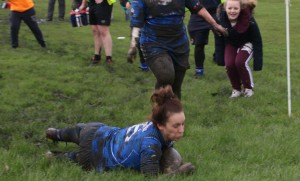 Now the game swung in the favour of Hunslet, Odsal scrambled to defend. With probing runs from both Hunslet half backs it was inevitable Hunslet would score again. Working left from the Odsal 40, Hunslet played some excellent rugby to score in the corner with Anita. Conversion missed. Score 8-10.

With the game now in the balance, strong defence was needed to keep the opposition from scoring. First Hunslet attacked, then Odsal, there seemed to be no let up. With one last desperate push Odsal gave it their all. Getting up to the Hunslet try line they pitched one last ditch attempt to cross the line, only for play to break down with a knock on. Hunslet brought the ball away from the resulting scrum, making good yards down the pitch. Finally, the ref put whistle to lips and blew full time Final Score 8-10.

A jubilant Hunslet congratulated each other on such an emphatic win. One of the best games for sportsmanship I’ve ever witnessed, today was a pleasure. Hunslet came out victorious but under the circumstances everyone on the pitch today gave their heart and soul.