On a warmer Sunday than last at the Frost Financial Stadium, C&K Basildon Ladies hosted another cup match; the quarter-final draw of the BBC Essex Women’s Cup against Hullbridge Sports Ladies. 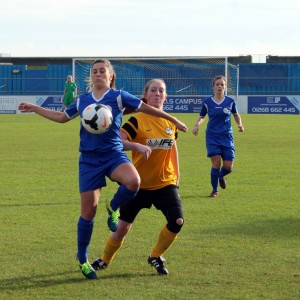 With under a minute gone, C&K Basildon Ladies were gifted a goal from an unfortunate deflection off a Hullbridge Sports Ladies player forcing the ball into her own net.

It didn’t take the home team long to settle into their stride and shortly afterwards Zoe Rushden made a great run into the box only to be brought down by a late tackle and awarded a penalty. Rushden confidently slotted home the penalty; 2-0.

C&K Basildon were obviously fired up for this cup draw after last weeks disappointing result as the pressure continued on the Hullbridge Sports Ladies defence. Even with keeper Michelle Bailey making some fantastic saves, Hullbridge Sports defence were unable to withstand the pressure for long and Karissa Rodney was able to slot a well struck ball past the keeper to make the score 3-0. Before half-time Amy Nash was able to add her name to the score sheet as she struck a powerful shot into the back of the net; 4-0. 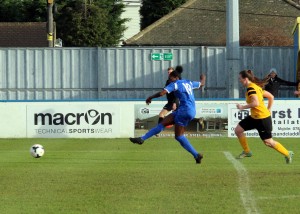 Hullbridge Sports Ladies started the second half much brighter and gained more possession of the ball in the centre of the pitch. A C&K Basildon corner turned into a goal mouth scramble which Stacey Little was eventually able to stab home for her first goal at C&K Basildon Ladies; 5-0. 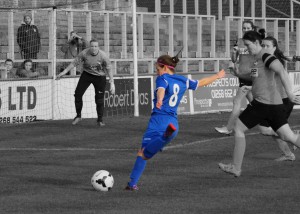 Hullbridge Sports Ladies were able to dig deep and their resilience was rewarded with their own moments of pressure on the C&K Basildon defence but they were unable to convert their chances. Another well timed through ball saw Amy Nash in on goal where she confidently struck the ball past the keeper; 8-0. A sustained attack saw Karissa Rodney put in a low cross to Lily Mellors who was able to slot the ball home for her first goal of the day; 9-0. With the full-time whistle approaching, Lily Mellors was able to convert another chance for the last goal of the day, making the final score 10-0 to C&K Basildon.

The Semi-Final will see C&K Basildon Ladies away to Colchester Town Ladies on 21st February.