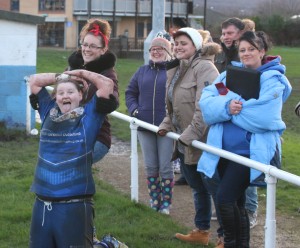 Hunslet Warriors v East Leeds – this was a much anticipated fixture, as much for the Hunslet players as the coaching staff. With the local council closing all their pitches the Hunslet coaches worked tirelessly for 3 hours to get this fixture playable. Luckily they just managed to pull it off.

Now for the game. As you’d expect with any local derby, tension was running high in both camps and plenty of ill feeling so a tough contest was expected. With the game going too and fro, Hunslet showed more structure in attack which soon paid off with a well worked move resulting in a try, scored by Chloe Cass. Conversion missed, score Hunslet 4 East Leeds 0.

East Leeds licked their wounds, consolidated and put together some well worked rugby. The Hunslet defence worked tirelessly to keep them out. With 10 minutes to go Hunslet were piling on the pressure and when they seemed to be able to do no wrong, disaster struck. Chloe Cass went down injured after what appeared to be a very normal tackle. With all medical staff from both teams on the pitch Hunslet made the decision to call an ambulance. Play was stopped for 20 minutes while paramedics took Chloe* off the pitch. With the Hunslet team feeling slight unnerved by what had happened to a team mate, the game commenced. Just before the half time whistle East Leeds went over the white wash. Conversion missed – half time score 4-4.

Hunslet started the second much as they’d played the first half. Showing true grit and Warrior resolve and came out determined to win. Soon enough, East Leeds started to lose their cool. With piggy back penalties Hunslet once again found themselves in a dominant position. Only 5 yards out Gail worked from dummy half, drove to the line only to off load at the last minute to Annie-May. Twisting and turning Annie made her way over the line for a deserved try. Conversion missed score Warriors 8 East Leeds 4.

The tide changed several times over the next 15 minutes, with both side taking the offensive. Hunslet’s poor discipline when defending their own try line led to East Leeds powering over. Once again, conversion missed. Score Hunslet 8 East Leeds 8.

The final whistle wasn’t far off, both teams gave it their all. Neither being able to break down the others defence.

A meeting with coaches and the ref at full time came to the decision, with failing light, that golden point was the best option. Hunslet, having started with 12 players and 1 sub. Then losing Chloe, the stand off, and all the injuries that come from playing a contact sport, looked up against it. The Hunslet girls had shown such resilience through the game, were just worn out. East Leeds mounted one last ditch assault, and managed to score in the corner. Final score, Hunslet 8 East Leeds 12.

*Injury update: We have been informed that  Chloe Cass broke her foot in three places and unfortunately, for both her and the Warriors, she will be out for at least 3 months. We wish Chloe all the best for a swift and total recovery and hope that she’ll be back playing again as soon as possible