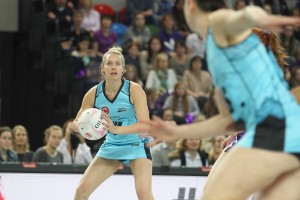 An emotional Tamsin Greenway thanked her fellow players, fans, family and staff after calling time on her netball playing career with a 68-58 win in a star-studded testimonial match at Surrey Storm’s home, Surrey Sports Park.

A host of the nation’s top netball talent past and present turned out for the legendary Storm player-coach in front of a sell-out Guildford crowd, raising over £2200 for charity Shooting Star Chase.

The game ebbed and flowed in a fun-filled night in celebration of her career which has seen Greenway feature for Surrey Storm, Team Bath, Queensland Firebirds and England.

Commenting after the game, a humble Tamsin Greenway addressed the crowd: “That was a lot of fun. You could see out there I definitely had 6 months off and had not trained!

“I want to thank all the players out here tonight. Not only are they all my friends, but some of them are like my sisters and my family. I’ve known them since I was 18 and to come back and play for this today and make some money for charity and to share it with you guys who just love netball is amazing.

“People who know me know I’m just the biggest netball geek and off court I’m quite to myself. Thank you so much for doing this, thank you for raising money for Shooting Star Chase Hospice and for sharing it with these guys because it was just fantastic tonight!”

“When I first won my Super Cup there was about 50 people in a hall in Blackpool and we used to laugh that it was just my Mum, Dad and the Dunns! The fact that it’s now changed, there’s so many people that want to watch, there’s kids that want to grow up and one day be on this court – 2016 is going to be a big year for netball and please continue to help us make it boom because it is going places!”

Greenway will now continue as Director of Netball at Surrey Storm and Surrey Sports Park as Storm prepare for the start of the Vitality Netball Superleague at Super Saturday vs Team Bath on Saturday 30 January.

[Pictured above: Tamsin is joined by friends and former team mates for her testimonial game at Surrey Sports Park]