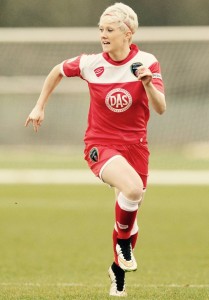 The attacking full back, joins from former Womens Super League division one club Bristol Academy, following an injury hit season, which saw her make 11 appearanceThe 25 year old, is reunited with manager Jamie Sherwood for the second time, where Sherwood previously worked with Townsend, whilst manager at Cardiff City.

Sherwood is confident that Townsend will fit in extremely well to his plans for the 2016 season and the Lady Glovers manager had this to say: “I am really pleased that we have secured Lauren for the 2016 season. She was my captain at Cardiff City Ladies and was vital to the togetherness that we created there.

“Lauren is an attacking fullback with the capabilities of creating and scoring goals. She can play on both flanks and I am excited to see her in the green and white of a Yeovil Town Ladies shirt.  She brings a wealth of experience and quality and is another excellent character that will add strength and depth to our squad next year.”

Townsend commented on her exciting signing and said “’I am delighted to be joining Yeovil Town Ladies FC and looking forward to the season ahead.”

“I’d like to say thank you to everyone at Bristol Academy. Despite it being a tough season, I gained some invaluable experience and enjoyed being a part of the club. However, I’m really looking forward to the new challenge with Yeovil Town Ladies in 2016.”

“Yeovil are a fantastic club whose ambitions mirror my own. They have a very good squad and loyal supporters that give the club a real family feel. I hope that my determination and drive can help gain promotion next season.”

“I was fortunate enough to work with Jamie at Cardiff. He’s a manager who knows how to get the best out of me and I’m really looking forward to working with him again, as well as some of my former team mates.”

“Due to a few injuries last season I spent a few games watching from the side-line, so I can’t wait to start training with the girls and for the 2016 season to kick off.”

Yeovil’s season kicks off in February where they are in SSE FA Women’s Cup third round action, before the FA WSL league campaign starts in the middle of March.