Judoka who train at Team Bath won three golds and eight medals in total during an impressive weekend at the British Judo Championships in Sheffield. 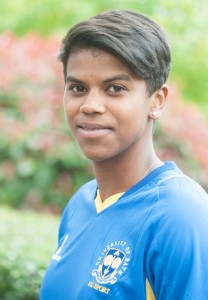 University of Bath Sport Performance student Prisca Awiti-Alcaraz, who is supported by a King Scholarship, set the tone on Saturday as she was crowned as national junior champion in the -63kg weight division.

The golden hat-trick was completed by Commonwealth Champion Megan Fletcher, who recorded a Yuko in the last five seconds of her -70kg final against Ryecroft’s Katie-Jemima Yeats-Brown.

Fletcher tweeted: “A very close final, but I am National Champ. Thank you for the awesome support from Team Bath today.”

Adam Hall and Conor Murphy won silver and bronze respectively in the men’s -100kg competition, while Adam Conroy and Sports Performance graduate Gregg Varey were runners-up in the -60kg and -66kg weight divisions.

Team Bath’s judoka are coached by Juergen Klinger in the dojo at the Sports Training Village.