Great Britain put in a stylish performance to seal a 5-1 win and take seventh place after mixed results at the Hockey World League Final in Rosario, Argentina.

The first quarter of this 7/8th place match between Great Britain and Korea was a battle for dominance in the centre of the pitch. The deadlock was broken by Nicola White (9′), whose run into the circle was unimpeded. Almost unable to believe her luck, the player smashed the ball deep into the far corner, past Korea ‘keeper Jang Soo Ji.

Kate Richardson-Walsh and Emily McGuire provided the cover, and any attempt by Korea to break out during this period of dominant play by Great Britain was cut out by the two experienced defenders. 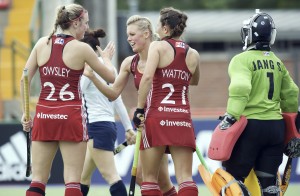 It was Watton (29′) who doubled Great Britain’s lead – she was in the right position as Alex Danson brilliantly danced her way through the Korea defence. Danson slipped the ball across the face of the goal for Watton to shoot sharply home.

Great Britain got off to a fantastic start in the second half as Hannah MacLeod (33′) got a touch to a shot from Danson. This seemed to energise the whole team and the sixth-ranked team won a series of penalty corners, although they were unable to convert them.

A fifth penalty corner nearly yielded results as Crista Cullen flicked high. Jang saved, and was then nimble enough to make two subsequent saves as the Great Britain forwards tried to put the ball away.

There was finally success from a penalty corner in the 48th minute of the game. The ball was slipped to Nicola White who made no mistake as she put away her second goal and extended Great Britain’s lead to four.

The final five minutes saw Great Britain continue to flow forwards and the pressure paid off as Ellie Watton won a penalty stroke. Helen Richardson-Walsh made no mistake in slotting the ball home for her third goal of the competition. Korea came back into the game late on with a consolation goal when Han Hye Lyoung put away a penalty corner.

Head Coach Danny Kerry: “The tournament as a whole has been a good experience. The critical game was the China game where we created lots of chances but the ball wouldn’t go in. Against New Zealand,the first half was really disappointing and as a result we find ourselves playing for 7/8th place. There were other interesting results. Australia and Netherlands in the bottom half too, is interesting.

“We have built some good understandings among the younger players and I am very pleased with the way we played against Korea. They play in a certain way and we negated that. Crista [Cullen] is coming back and we wanted to protect her a little from getting injured but she will get a lot of time now. We had 10 penalty corners today, another day the scoreline would be different.”

The players now get three weeks off. Then we will have a lot of meetings and some good matches through the January, February, March period. Then there will be some refining.”

Crista Cullen: “Set pieces are something you just have to believe will come. I am increasingly getting myself into situations where I have the opportunity to score. I am not getting frustrated, I am just keeping my cool.

“We must now go back and review and understand what happened. There was a culmination of errors as to why we didn’t get a semi-final spot. We need to be hard on ourselves and learn from the mistakes. Come Rio we must be on the right end of the scoreline.”

Great Britain are in action next summer against some of the sides featuring in the World League, as they take on the best five teams in the World at the Women’s Champions Trophy in London.