Olivia Merry’s last-minute strike for New Zealand sent the Blacksticks in to the semi-finals of the World League and condemned Great Britain to a dramatic defeat. Anita Punt had given New Zealand the lead in the first half but Helen Richardson-Walsh’s third goal of the tournament had the game seemingly headed for a shootout until Merry’s late intervention broke Great Britain hearts. 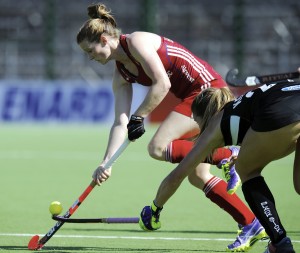 Great Britain showed their attacking intent from the first whistle with Susannah Townsend driving into the circle but just failing to find Alex Danson with her pass. At the other end Punt broke forwards down the left and found Petrea Webster inside the circle but Maddie Hinch was out quickly to block well. With just less than three minutes left in the first quarter New Zealand won the first penalty corner of the match. The injection was not stopped and although Punt got the shot away, Hannah Macleod made a fine block to avert the danger and it remained goalless at the break.

Punt was first to threaten at the start of the second quarter. She broke into the circle and was only halted by the advancing Hinch who cleared well with her stick. In the 22nd minute, the Blacksticks took the lead. Hinch denied the New Zealand Captain twice in quick succession but with Great Britain unable to clear their lines the No32 was able to slot the third effort into the far corner for her first goal of the competition, her 87th international goal.

Punt who was a constant threat and played in Kirsten Pearce for a clear shot at goal. Hinch extended a right leg to make a fine save. Great Britain won a penalty corner on the stroke of half time. Crista Cullen took the shot but Sally Rutherford watched it all the way and made the save.

At the start of the second half some superb 3D skills from Alex Danson freed Townsend down the left. Rutherford smothered the cross but with Danson closing in a foul was committed and a penalty corner was awarded. Cullen’s shot was charged down and it remained 1-0. Punt was shown a yellow card in the 44th minute meaning Great Britain would start the final quarter with a player advantage as they sought to recover the deficit.

New Zealand pushed hard for a second goal in the final quarter. Charlotte Harrison stung Hinch’s gloves with a fierce shot that was bound for the top corner. As Great Britain threw caution to the wind in search of the equaliser gaps started to appear in defence. Pearce found herself clean through but Hinch did well to save again.

At the other end Danson broke free inside the circle but Rutherford got down well to block. Great Britain asked for a video referral, questioning whether there was a foul as Danson shot. A penalty stroke was given by the video umpire. Up stepped Helen Richardson-Walsh who made no mistake and levelled the scores with a low finish, her third goal of the competition.

New Zealand forced a penalty corner after some good work from Stacey Michelsen with the clock ticking down. Punt took the shot but Helen Richardson-Walsh was on hand to divert the ball over the bar. With the game seemingly headed for a shootout there was one final twist. Olivia Merry’s backhand strike found its way past Hinch at the near post to break Great Britain hearts and send New Zealand into the semi finals.

Great Britain will now take part in the classification matches, time and opposition to be confirmed.

Danny Kerry, Great Britain Head Coach:  “We were quite naive and played some silly passes out of defence in the first half and then made a silly mistake at the end. It was a turn-over and the ball went through Maddie’s gloves. It was an accumulation of a lot of little things and that means the game gets away from you. We need players to be here and go through these experiences. There are some players at home who also need to be here to get the experiences for Rio. It’s all very well making excuses but international hockey is tough. We will debrief and look at our decision-making. The players now understand a little bit more about what this level is like. The younger players now get the tempo of the game and the heat of the quarter final format. They will probably play with a bit more nous and we won’t let games get away from us.”