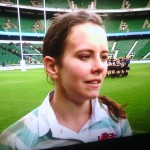 Full back Alice Middleton and centre Anna Wilson scored scored 3 tries apiece in Cambridge’s 8 try rout today as Cambridge beat old foe Oxford by 52-0 in the first ever women’s Varsity Match to be held at Twickenham. 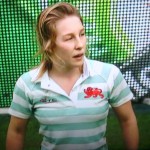 Middleton put a total of 27 points (3 tries and 6 conversions) on the board during a performance that earned her the player of the match and the Bunting-Pegas Trophy (named after the Oxford and Cambridge captains who initiated the first Varsity match back in 1988).

Also on the score board were winger Lara Gibson and flanker Chloe Withers.

However, although Cambridge put in a dominant performance, particularly in the scrum Oxford fought hard and their undoing was perhaps a little inexperience coupled with lack of composure at crucial points in the game which meant that opportunities to score went begging.

For their part Cambridge were very patient and went through phase after phase, gradually wearing Oxford down, evidenced by the fact that five tries came in a 20 minute period towards the end of the second half.

The spirit and determination of both sets of players is immense and illustrated by an incident when the ref suggested to a Cambridge player that she get her finger treated – the player (I think it was McNally) trotted across the pitch to the medic holding up a horribly dislocated finger (smiling all the time) – had her finger put back into the correct position and went back to join in the scrum!  I know this is not unusual in rugby but I still find it incredible.