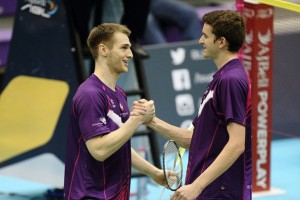 The result was an important one for the Loughborough team, having lost out to Team Derby in last year’s final in a close fought encounter. Not only that, but it sees Loughborough go top of the NBL table for the first time ever, with a very much home grown team consisting of four current students and two graduates.

On the front foot from the off, Andy Smith was a class above his young Derby counterpart Alex Dunn, racing into 6-0 lead before taking the first game 9-4. The Beijing Olympian was in impressive form as he dispatched his opponent in straight games on his second appearance in a Loughborough shirt.

“I’ve got more experience in singles than mixed. Mixed last time we didn’t play particularly well as a first game together – it just takes a bit of getting used to. Tonight we wanted to get some good momentum, so it’s a really good start.”

Up next were Jenny Wallwork and Viki Williams, and the newly paired duo also got off to a flying start, taking the first game against Kate Robertshaw and Gail Emms 9-3. The Derby duo pegged back captain Wallwork and debutant Williams though and continued their momentum to go 2-1 up.

The pressure was on the Loughborough girls in the fourth game, and with the Derby duo just two points from victory they rallied, but couldn’t quite save the match, succumbing 1-3.

Post-match Jenny Wallwork commented: “We were really happy with how we started the game. We did come out quick. But unfortunately somewhere along the way we lost our momentum. We made a few mistakes and we lost a bit of confidence and I think that sort of showed throughout the rest of the match and we never really regained that confidence in trying different shots. It was tough.”

The positive starts continued as Chloe Birch took to court in the women’s singles against 15 year old talent Grace King. Birch was in a business-like mood though, winning the first game 9-3. A Team Derby time-out at 5-1 in the second game wasn’t enough to throw Birch off her rhythm though, as she won the game 9-4.

Starting the third and final game with a Power Play, Birch was immediately two points to the good and quickly ran out a 9-1 winner to secure the match.

“I think everyone has taken confidence from every game and everyone is playing really well. It’s a lot better start than last year and I think everyone is getting used to the NBL and really enjoying it this year, instead of being a bit nervous like last year.”

Harley Towler was back in action after an almost year long layoff due to wrist surgery and he played his first match back alongside Peter Briggs in the men’s doubles. They faced perhaps the toughest task of everyone in purple, as they took on the unbeaten pairing of Andy Ellis and Chris Coles.

It was first blood Derby, and the second game looked to be going the same way at 7-8. However a tactical use of their Power Play saw the Loughborough lads bag two points, and with it the game, taking it to 1-1.

The third game was equally ferocious with both pairs exchanging a series of smashes but Briggs and Towler were on top. At that point the Derby duo’s frustration bubbled over, Coles yellow carded for descent. It didn’t distract the Loughborough men though as they took the third game to take the lead.

In the fourth of five thrilling games, the momentum swung yet again, Derby squaring the match. That meant it went to the shorter fifth and final game, where the home pair squandered two match points. It was third time lucky though, much to the delight of the extremely vocal home crowd, as the pair wrapped up victory 5-4.

“The support is fantastic. It didn’t just give us a boost, it was throwing off the opposition a bit on some critical points” said Briggs.

On his return to action, Towler added: “For me it’s really good to get back on the court and it’s great to be back in the NBL. I missed the last league match and the play-offs last year, so this atmosphere is brilliant and you only get to do it 5 or 6 times a year. It’s brilliant to finally win a 5-4 in front of a home crowd as well!”

With match-night victory already assured it was left to Greg Mairs and Jenny Moore to put on a show for both the crowd and the Sky Sports cameras. That they did, playing some strong badminton to overcome Ben Stawski and Tiara Samuels in straight sets.

Naturally they were thrilled with the 4-1 event night victory and Moore summarised: “Tonight was really good, especially after the NBL final last year where it was so close at 3-2. We all wanted to prove that we could beat them tonight and we showed exactly that, so I am really happy for everyone in the team.”

After the Christmas break Loughborough Sport make the journey south to take on Surrey Smashers on 11th January 2016. For more info on that fixture and the rest of the NBL season head to the Loughborough University site.