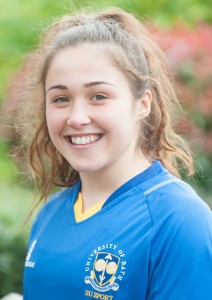 The Sport Performance student, who is supported by a Trendell Sports Scholarship, started at full-back as England’s development touched down twice in the last ten minutes to seal a 37-29 victory at Esher RFC.

Gregson, who had a key role in the decisive last-minute try, was one of a number of players in the team to have represented England at senior level, having made her debut in the 2015 Six Nations.

The Bristol RFC player has also won the European Championships with England U17s and represented her country in Sevens competition.

She will hope to be involved again when England face the Maple Leafs for a second time on Saturday at Esher RFC, kick-off 2pm. Tickets will be available on the gate.

England Lead XVs coach Scott Bemand said after Tuesday’s win: “The purpose of the National Academy is to play credible fixtures with both aspects of performance and development in mind.

“Last time we played a fixture like this in 2011 the squad contained a number of players who went on to win the 2014 World Cup.

“It will be exciting to see the next generation again on Saturday where we know we will face another strong test, giving players an excellent opportunity to put their hands up for future selection.”

The re-match is on Saturday December 5 (kick-off 2pm)