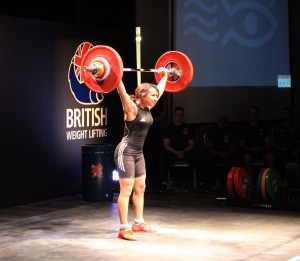 Zoe Smith broke two British records as she boosted her chances of competing at the Rio 2016 Olympic Games by securing a top-ten finish at the IWF World Weightlifting Championships in the United States.

Commonwealth champion Smith, who does some of her training at the University of Bath Sports Training Village, lifted an overall total of 221kg – the most ever by a British woman in the -63kg weight category – as she placed ninth.

The 21-year-old lifted a new snatch personal best of 97kg before setting a new British record of 124kg in the clean and jerk, beating the previous standard set by Michaela Breeze nine years ago.

Smith posted on Instagram: “To be competing alongside some of the best in the world was a real privilege. Hopefully someday soon I’ll even give them a run for their money! Ninth place at the World Championships ain’t too bad at all.”

The next major target for Smith is April’s European Championships in Norway, where British Weightlifting need to secure more ranking points to gain a Rio 2016 berth – good luck Zoe!