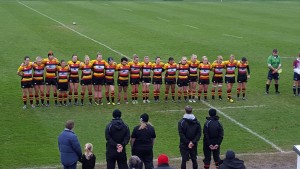 Richmond hosted their closest Premiership title rivals Saracens at the Athletic Ground on Sunday in what was a tense, thrilling match, but ultimately, the slick handling of the Saracens back line proved to be the deciding factor between the two sides.

Within five minutes, Saracens found themselves on Richmond’s five metre line, looking dangerous. Richmond turned over a scrum however, and forced them backwards, with a series of great lines and fluid offloading.

Both teams fought to establish some control in the game and after fifteen minutes, Richmond finally broke out of their half, but gave away a penalty, which allowed Saracens to kick for the lineout. Richmond showed their ability to dominate set play, by winning the lineout and reclaiming possession – set piece was an area Sarries would struggle to compete in all day. 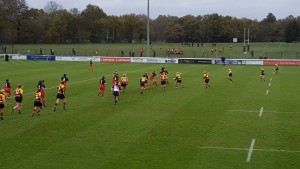 Richmond attacked hard as Laura Kapo took the ball and ran twenty metres, before a neat offload allowed them to set up camp in Saracens’ territory. Some excellent scrummaging, along with a brilliant line cut by number 8 Anna Caplice, took Richmond ever closer to the try line. But they were unable to execute the final phase play and convert their pressure into any points.

As expected the game was ferocious, with a few tempers flaring. Thirty minutes in, Saracens’ scrumhalf Georgie Gulliver was sin binned for a swinging arm. But this seemed to add fuel to Sarries’ fire as they responded through a bone-crunching hit from Poppy Cleall on Jackie Shiels.

Saracens suddenly stormed down the field, and the forwards asserted themselves, keeping the ball in tight and mauling it over the line to score.

Almost immediately after, the Saracen’s 12 charged down Richmond’s clearance kick right on their own tryline, and she was able to control the ball to touch down for the second try of the game. In blustery conditions, kickers were having a tough day taking conversions so the score stood at 10-0 going into halftime.

In the second half Saracens started picking holes in Richmond’s defensive line, but Richmond who were still very much in the game repeatedly managed to recover in time to avoid any real damage.

The game remained within Richmond territory for a long period. Captain Jackie Shiels coming off with injury had an impact on the back line and caused a need for reshuffling.

Determined not to let their lead slip, Saracens piled the pressure on and were being very clinical at the break down but resolute defence held them out. The crowd spurred on Richmond, who eventually kicked themselves away from immediate danger.

Twenty minutes into the second half, the game took a turn as Saracens fullback Nina Vistisen scored the third try, receiving the ball on the wing off first phase play, and cutting a great line between two defenders. The conversion was unsuccessful, making it 0-15.

Richmond then received a penalty in Saracens’ danger zone, from which scrum half Leanne Riley sniped her way over to score Richmond’s solitary try.

No sooner had they crossed the whitewash, Saracens responded and scored again, through a great break by Cleall who offloaded to Captain Sonia Green who dived over the line, extending their lead to 5-20.

Richmond have a break next week due to the England Academy games, but will look to finish the main league season on a high to go into the play offs with confidence.

Saracens line up from www.saracens.com