ENGLAND Women’s National Academy side will face the Maple Leafs at Esher Rugby on Tuesday, December 1 in the first of two fixtures against the Canadian side. 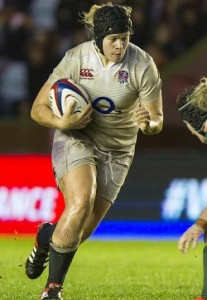 As part of the Women’s development pathway, the National Academy side includes current senior players – including La Toya Mason, Lotte Clapp and Justine Lucas who all featured in England’s autumn tests – alongside up and coming talent.

“We have an ever strengthening U20 programme but there is a big gap from there to a full cap so this programme is designed to support individual players with their development. The games give an opportunity for players to practice the skills they have been working on and also provides an opportunity for a number of players who have been performing really well in club games to be seen against really good quality international competition.”

Commenting on England’s opposition, Ponsford said: “The Maple leafs will be a very strong outfit. The squad contains a number of younger players who were part of the squad that provided our seniors with a stern test in the summer. I am really looking forward to seeing the National Academy girls step up to the mark tonight and show their potential.”

Tickets are available on the gate at £5 for adults and £3 for concessions.

Above photo of Rachel Lund from www.ajbphotographic.co.uk