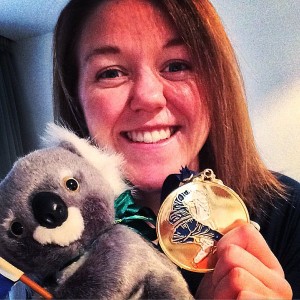 Megan with her gold medal and a friend. (photo @Megan_Fletcher1)

Megan Fletcher struck gold and there was a bronze medal for Jan Gosiewski as Team Bath judoka enjoyed success at the Oceania Open in Woolongong, Australia.

Commonwealth champion Fletcher won all of her fights by ippon to claim the women’s under-70kg title and 100 valuable ranking points on the road to the Rio 2016 Olympic Games.

After defeating home favourite Naomi De Bruine in the preliminary round, Fletcher beat Lynn Mossong of Luxembourg in the semi-finals before taking gold at the expense of Kathleen Sell of the United States.

Gosiewski, a Biomechanics PhD student at the University of Bath, produced his best result of the year as he won bronze in the men’s under-73kg weight division.

The Trendell Sports Scholar and Dual Career athlete recorded victories by ippon over New Zealand’s Elliot Connolly and Jake Bansted of Australia to reach the semi-finals.

He narrowly lost out in a hard-fought contest against eventual champion Marco Maddaloni of Italy but responded well by defeating fellow Brit Patrick Dawson to secure a podium place.

Business Management graduate Tom Reed, who will undergo an elbow operation on his return to the UK, lost out to Australia’s Anthony Kouros in the under-81kg division.

Reed will continue to battle through the pain barrier at the Qingdao Grand Prix, taking place in China from November 20-22. Gosiewski and Megan Fletcher will also be competing.