Great Britain Head Coach Danny Kerry has named the 18 athletes to compete in the FIH World League Final in Rosario. Kerry has made three changes to the squad who competed in the World League Semi-Final in June, a competition where Great Britain secured their qualification for the Olympic Games in Rio.

Tournament details including the match schedule can be found here. 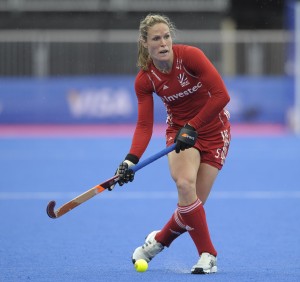 Kerry has opted to bring in three players for the World League Final, two of whom – Sam Quek and Ashleigh Ball won gold medals with England at the Unibet EuroHockey Championships in August. The third player to come in is London 2012 Bronze medallist Crista Cullen. Cullen, who has 171 international caps, stepped away from hockey after the 2012 Olympics but made a return to the Great Britain training squad in October 2015. The World League Final will be her first tournament since her return.

The players who competed at the World League semi-final who will not play in Rosario are Susie Gilbert, Giselle Ansley and Shona McCallin.

A number of players are set to reach landmarks in their international careers during the tournament in Argentina. Captain Kate Richardson-Walsh currently has 348 combined England and Great Britain caps and is set to reach 350 out in Argentina.

Striker Alex Danson has 245 international appearances to her name and could reach the 250 mark in Rosario. Helen Richardson-Walsh is poised to make her century of appearances for Great Britain; she currently has 99 GB caps whilst Emily Maguire and Nicola White should make it to their half-centuries, having as they do, 48 and 49 Great Britain caps respectively.

Great Britain are in a pool with hosts Argentina, who they face in their opening game, before going up against Australia and China in their remaining pool games.

Danny Kerry, Great Britain Head Coach: “Our time in Argentina affords us two great opportunities in the three match test series in Tucumán, and the World League Finals in Rosario. Over the course of those events we will use 25 players for a number of different aims. It will provide us team and individual competition development exposure. As part of that we will look at a number of combinations under test match and tournament conditions allowing us to further build our capacity in the many facets of performance. It has been a difficult selection as we will leave behind a number of athletes that could easily swap in for those selected. This is testament to the strength we have in depth in this Olympic cycle.

There will understandably be media interest in Crista Cullen’s selection. Fundamentally the test series and tournament provides Crista with an opportunity to get some much needed match play after only completing two practice internationals (against USA in October) since her last outing at the London Olympic Games. Crista has returned to the GB programme in great physical shape and now needs exposure to high standard international match play.

As a squad we will meet before departure to discuss and agree our objectives given the opportunities in front of us. As ever we will take a game by game approach and have faith in our preparation. This approach has served us well through 2015 and we will continue to build toward Rio and beyond.”