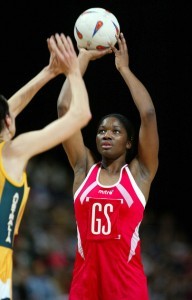 With the start of the 2016 Vitality Netball Superleague season now just 80 days away, Loughborough Lightning have further boosted their squad with the signing of birthday girl Ama Agbeze.

A versatile defensive player who has won 69 caps for England, Agbeze is another Lightning signing to return from the ANZ Championship, making the switch from New Zealand side Central Pulse.

The move marks a home-coming on two levels for Agbeze; returning to play netball in the UK and returning to her alma mater, Loughborough University, from which she graduated with an MSc in Finance and Management in 2007. Agbeze was also a key part of the Lightning team between 2004 and 2007.

Making her international debut in 2001 aged 19, Agbeze has gone on to have a glistening career, which includes winning bronze at the Commonwealth Games in Melbourne in 2006. Since then the athletic defender has played in both Australia and New Zealand for West Coast Fever, Melbourne Vixens and latterly the aforementioned Central Pulse.

Of the move, Ama said: “It has been such a long time since I have lived or played in the UK. I went off to Australia in 2008 and haven’t played a full NSL season since 2007. The league has changed for the better and I’m excited to be involved again.

“The Loughborough Lightning set up holds a lot of promise and I am keen to play a part in it. I have fond memories of my previous stint with Lightning, and hope that I can bring a level of experience and maturity that I have developed in my game since I last was here.

“Aside from the netball I have taken into consideration all the variations on purple that I can work into my hair, and know that I have definitely made the right choice!”

Meanwhile Lightning Head Coach Karen Atkinson was delighted with the acquisition of yet another experienced England international. “It is fantastic that Ama has decided to return to Loughborough Lightning where she first started her Super League career.  She is an extremely experienced, athletic and versatile defender and I am looking forward to seeing what she can bring to our squad this season.

“Our pre-season training is well underway but we are looking forward to testing ourselves at the MGT in Manchester on the 28th November and at our very own Tri-Franchise Showdown with Team Bath and Team Northumbria on 12th December.  We hope to see as many fans there as possible cheering on the new look squad.”

Get your tickets to see Lightning in action by clicking here.