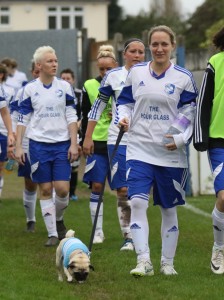 Town Ladies moved into the First Round Proper of the FA Cup with a well earned victory away to Marlow, conquerors of Norwich City in the previous round.

Luton were awarded a penalty as early as the 5th minute when Natasha Fensome surged past her marker and was brought down. Zara Carroll`s spot kick was too close to the keeper though and she  grabbed the shot at the second attempt.

To add to Luton’s woes the hosts took the lead after 12 minutes finishing off a fine move with a low shot into the corner of the net.

An equaliser arrived when Carroll’s corner was headed in at the near post by Shannon Pratt for her second goal of the campaign. Pratt almost added a second from another corner but this time her header flashed narrowly wide of the far post. 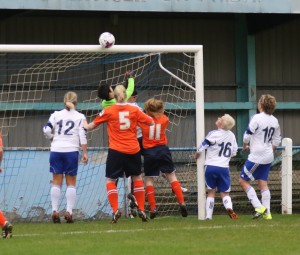 Hatters continued to dominate the game and an overhead kick from Erica Byron was pushed onto the crossbar and over by the overworked Marlow keeper. The keeper then did superbly to claw away two corners from under her crossbar when Luton seemed destined to take a lead.

Luton started the second half at a high tempo and Fensome’s cross was met by Byron whose effort again struck the woodwork and flew wide for a goal kick. Town continued to lay siege to the home goal with a 25 yard strike from skipper Shanice Jiminez flying just wide of the target. 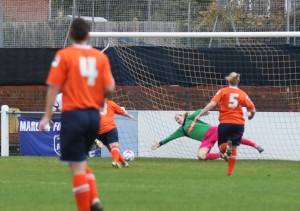 The Marlow defence failed to learn from their mistake as they gave Jiminez room to fire in another shot from distance and this time it was too hot for the keeper to handle as she was only able to parry the ball into the net.

Soon it was 3-1 as Carroll swung in a cross shot which dipped in at the far post to make it 3-1. A fourth soon followed via Jiminez whose 20 yard effort was fumbled by the keeper and rolled across the line.

Manager Nikki Baker said “This was always going to be a potential banana skin but the players showed great character to fight back and overwhelm their opponents. It is always important to respect your opponents and we were determined not to become another victim of a lower placed team. We went on the attack from the beginning and totally dominated the game apart from the ten minute spell around them scoring.”

Town face the short trip to Bedford in the next round to be played on 6th December.