Two goals from  Jordan Nobbs and a third from Chioma Ubogagu gave Arsenal their fourth Continental Tyres Cup victory in five years following a 3-0 defeat of Notts County.  The Lady Pies had been reduced to 10 players, after just 30 minutes, following the somewhat harsh straight red card for Laura Bassett for a foul on Vicky Losada. 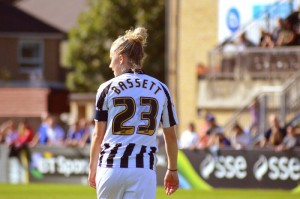 Notts were already 1-0 down when they were reduced to 10 and Nobbs made it 2-0 shortly afterwards with a shot from 25 yards out that gave Carly Telford no chance.  Chioma Ubogagu wrapped up the win with a neat finish in added time.

Three months ago Notts lost to Chelsea at Wembley Stadium in the Women’s FA Cup, and were determined to put up a better fight, and despite being down to 10 players they battled hard, but they had an uphill battle against an Arsenal side determined to reclaim the trophy they lost last season to Manchester City and to add some gloss to what, for them, has been a disappointing season.

Once 2-0 up Arsenal were happy to play keep ball and were able to limit chances for the Lady Pies.

Always a shame for both teams when the match is marred by a contentious decision [made worse by the fact that the Lady Pies were not even able to collect their medals because of some sort of communication error].  Congratulations to Notts County for getting to two finals in one season and to Arsenal for winning the cup.  Let’s hope things go a little more smoothly next season!

Photo above of Marta Corredera by Gino D’Andrea