The England Women’s squad has today been announced ahead of  autumn internationals against France and Ireland.

England Women will kick off against France at Le Stade Francis Turcan in Martigues on Saturday November 7, 9pm (local time). The two sides last met in this year’s Six Nations, which resulted in a 15-21 defeat for England.

That game marked Rochelle Clarke’s 100th cap and she will get the chance to add to that tally after being named in the autumn squad alongside fellow World Cup winners Emma Croker, Sarah Hunter, Laura Keates, Ceri Large, LaToya Mason, Marlie Packer, Amber Reed and Tamara Taylor. The match will be broadcast live on France 4 TV and Sky Sports HD.

After their trip to the South of France, England return to home soil, facing Six Nations champions Ireland at The Stoop on Saturday 14 November, kick-off 3pm live on England Rugby . 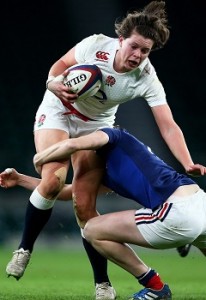 to hand Ireland the win in Ashbourne.

Head coach of England Women, Simon Middleton said: “We’ve continued along the lines that we started last year when we looked at the EPS after the 2014 World Cup, which recognised the loss of seven very senior, experienced girls through retirement. We looked at recruiting new players into the squad who maybe had been fringe players for the World Cup, in addition to experienced individuals.

“It’s very much a squad with the 2017 World Cup in mind, involving players we know have still got World Cup ambitions and the ability to be involved, and then ones we feel can progress to that level.”

With that tournament just two years away, Middleton says performance is now key as the team head into the autumn internationals.

“We’ve got a really clear strategy in place, which started with the EPS squad last year and had a very fresh feel to it, along with a lot of the senior players adding experience. The Six Nations was about getting experience for uncapped players and we expected it to be a very challenging tournament. It was more about starting to develop that squad.

“The next step was the summer tour to Canada, which took a lot of those players to the next level. The upcoming internationals are an extension of that, so again, it will be a young squad but we’re certainly looking more towards performance than development now, which is crucial with a three year cycle.”