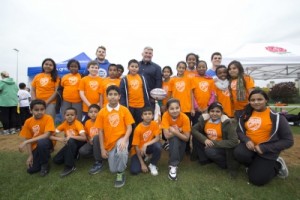 The Tag Rugby Festival, which involved 10 primary schools from the London borough of Tower Hamlets, saw over 100 children enjoying an afternoon of Tag rugby organised by students from Queen Mary University and RFU coaching staff. This initiative came from the idea to take rugby to local schools that had little or no contact with the sport, with student volunteers delivering free rugby sessions to over 300 school children over a three week period.

Jason Leonard said: “Festival of Rugby 2015 has really helped to bring a sense of excitement and celebration to the country, with more people able to get involved with rugby for the first time. There has been such a wide range of events taking place and with just one week left until the end of Festival of Rugby 2015, there’s still time for people to join in the party and get involved in our great game. 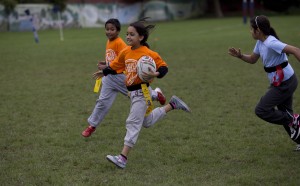 “Today’s Tag Rugby Festival really shows how the Festival of Rugby has inspired people to put on events in cities across the country, often linking in with local rugby clubs, bringing people together to create a really fun and enjoyable atmosphere.”

Paddy Vasey, President of Queen Mary University Rugby Club, said: “This all came about from an idea to run a sports inclusion event in Tower Hamlets, a borough with little or no contact with rugby. It has been so good to see the children having lots of fun playing the sport I love and including our event as part of the Festival of Rugby has made it really special.”

As well as the Tag Rugby Festival, there was a coaching session and round robin tournament for 40 pupils from local secondary schools that are part of the RFU’s All Schools programme.

The Festival of Rugby 2015, which has been running since June 10, has seen 1,000 rugby-themed events attended by over 1 million people across the UK, involving them all in rugby’s biggest year. Any event with a link to rugby could become part of the nationwide festival which runs until October 31.

Highlights from the Festival of Rugby 2015 have included: The International Defence Rugby Competition with the UK represented by the Royal Navy, the  Army and the Royal Air Force and other nations sending their combined teams;  Great Britain Wheelchair Rugby Community Festival, including the first ever Wheelchair Youth Tournament, taking place at the famous Copperbox Arena in London; Rugby’s Got Balls, supported by Rugby Borough Council featuring large-scale rugby sculptures on display across Rugby town; a HAKA challenge in Manchester, enlisting the help of Street Shakers, leaders in the field of youth and community sports and dance to encourage people to submit videos of them doing the Haka; and a celebratory rugby match to mark reaching the milestone of the 1,000th Festival of Rugby event.

Stephen Brown, Managing Director of England Rugby 2015 commented: “The Festival of Rugby 2015 has been a great celebration of the sport, with over 1  million people participating in over 1,000 events up across the UK. We’ve seen bake sales, choirs, dance groups, rugby clubs and cities hosting rugby themed events to celebrate rugby’s biggest year and, with just over one week to go until the end of the campaign, this is the last chance to get involved in the festivities.”

RFU Rugby Development Director Steve Grainger added: “Festival of Rugby 2015 is a great success and has given people across the country the opportunity to join in and be part of a very special celebration of rugby.

“In an historic year for rugby in this country, we have built on strong foundations to increase the appeal and reach of rugby, to give many more people the opportunity to get involved and to enjoy a game that has so many benefits, both on and off the field.

“This event today is an example of how we can reach out to young people who would otherwise have little or no experience of rugby. Our aim is to give as many young people as possible the chance to enjoy all the game has to offer and that’s so important for the legacy of the game to live on.”

There’s still a chance to be a part of Festival of Rugby, which runs until October 31. Go to www.FestivalofRugby2015.com to submit your event or to find events in your area.