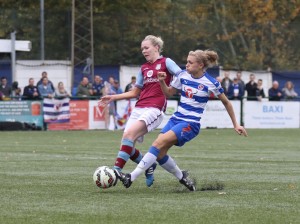 Yet another away day, this time Aston Villa, to complete the FA WSL 2 season saw Reading survive a nail-biting finale to clinch the WSL 2 crown with a 3-2 win against Aston Villa.

The Royals, top at kick-off and seven goals better off than Doncaster Rovers Belles, were seemingly cruising to the title in style with goals from Harriet Scott, Helen Ward and Bianca Bragg.  But goals in the final two minutes from Alicia Robinson and Tash Baptiste almost spoiled the party.

Laura May Walkley came close to breaking the deadlock after 25 minutes when her 30-yard thunderbolt crashed off the Villa crossbar.  Scott did make the breakthrough on the stroke of half-time, as her rifled shot evaded the fingertips of Caitlin Leach.

The Royals doubled the lead after 60 minutes when Ward was given the easiest of finishes from two yards out after former Villain Emma Follis slid the ball across the six-yard box.  After 80 minutes Bragg seemingly wrapped things up when Follis’s shot fell to the forward to tap in from two yards out.

But Villa sparked a late comeback when Robinson rose well from a Katie Wilkinson corner to spoil Reading’s clean sheet on 88 minutes.  Then with the last kick of the game Baptiste got another back for Villa controlling a cross and finishing coolly into the bottom corner. 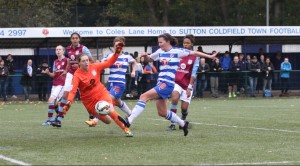 Captain Kirsty McGee believes Reading are ready to show they are one of the best teams in the country after clinching the WSL 2 title with a 3-2 win at Aston Villa.

Going into the day top of the table with a superior goal difference to second-placed Doncaster Rovers Belles, the Royals took the all-important lead just before half-time through Harriet Scott.  Strikers Helen Ward and Bianca Bragg extended their advantage, before goals from Alicia Robinson and Tash Baptiste set up a tense finish.

But, with promotion and now the title in the bag, McGee says Reading can take the top flight of FA Women’s Super League with BT Sport by storm. “I’m absolutely over the moon with the win and it feels brilliant to finally have my hands on the trophy,” she said. “We’ve already shown this season that we can compete with the best up there and I think with the squad that we have got we can only go one way and get better and better.

“We’ve sent out a message that we are now one of the top teams in the country and next season we want to be able to really compete at the highest level. The support has been absolutely fantastic week in, week out and also the support that we get from the men’s team is brilliant. 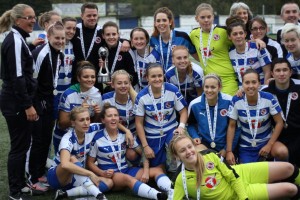 “We are now one of the top teams in the country and we thank every supporter who has been to watch every week, we appreciate absolutely everything. It’s cliché, but it’s got to be the togetherness that we’ve got as a squad that has been the most important factor in winning the league.

“It is not just Saturdays, Sundays and Thursdays when we go out and play matches, its every night in the week when we turn up and train in the cold nights, and put in the long hours of training.

“After the togetherness I have to say that the sheer belief we have had all season that we can achieve this has gone a long way and in the end we have achieved exactly what we have wanted too.”