SACA Premier Cricket is a two-day competition and represents the highest level of cricket played in South Australia outside First Class Cricket.

Taylor will take on wicket-keeping duties for the Jets in the first match of the 2015-2016 season against Port Adelaide Magpies at the Salisbury Oval, and will line-up alongside South Australia and Leicestershire’s Mark Cosgrove and former Hampshire batsman Joe Gatting – nephew of ex-England captain Mike Gatting.

Speaking ahead of the match, Sarah Taylor said: “I’m really excited about this opportunity – it’s completely unexpected and offers another new challenge and environment for me to test my skills against some very strong cricketers.

“I had no idea that I would be the first woman to play at this level in Australia, but I am sure that I won’t be the last.  I have grown up playing boys cricket at Brighton College and more recently in the ECB men’s premier league for Walmley CC, so I am used to playing with the guys.”

ECB’s Director of England Women’s Cricket, Clare Connor, added: “It’s great news that Sarah will get the chance to play at this level.  Much has been spoken and written about Sarah’s wicket-keeping prowess and I’m sure that this standard of cricket will enhance her skills and reputation further.  We are always looking for new avenues to challenge the England women’s players, and playing top level Australian men’s club cricket will certainly be a brilliant test of Sarah’s abilities. 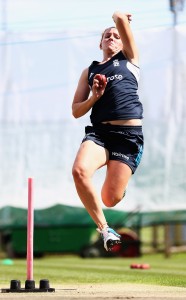 “For England women to be successful on the international stage we need to make sure that they are being exposed to high pressure and high quality cricket environments.  I am sure that Sarah will learn a great deal playing first grade cricket this winter, alongside featuring in the Women’s Big Bash League for Adelaide Strikers.”

Taylor has signed to play for Adelaide Strikers in the inaugural edition of the Women’s Big Bash League this winter, and is also currently playing 50-over state cricket for the Breezair SA Scorpions in the Women’s National Cricket League.

Report courtesy of the ECB.