Surrey Storm player-coach Tamsin Greenway will continue to coach Surrey Storm although, as announced this week, she will retire from domestic and international netball with immediate effect. The 33 year old mid-courter signed for Surrey in 2009 and featured as part of the new look, re-branded Superleague side that took the league by storm in its first season, making over 70 appearances for the London and South East franchise. 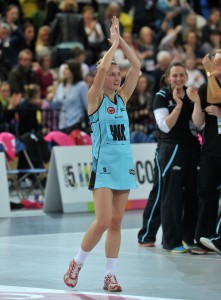 During her time with Storm, Greenway reached four Superleague Grand Finals and finally achieved her dream of lifting the trophy in a duck-egg blue dress earlier this year thanks to a Copper Box Arena victory over Hertfordshire Mavericks- Storm’s 3rd at the venue after two Netball London Live victories in as many seasons.

Tamsin made her English domestic netball debut in 2003 with Team Bath in the Super Cup, securing her first title in 2004 before the Superleague’s inception later that year. Two titles with the West Country side followed in 2006 and 2007 before earning a contract in the ANZ Championship at Queensland Firebirds in the 2007/08 and 2008/09 seasons.

The lure of a brand new franchise in the Superleague was enough to bring Tamsin back to the UK in 2009 as she became the face of the club and a leading ambassador for Storm and the sport as a whole both locally and nationally.

Tamsin took a well-earned break from the game in 2013 for the birth of her first child, but couldn’t be kept away from the court as she coached Storm to a Superleague play-off just days before welcoming Jamie into the world.

Internationally, Greenway commanded as much respect from her counterparts and supporters alike in the same way that she did on the domestic court. Making her England debut against South Africa in 2004, Tamsin went on to secure 67 caps for her nation.

Her first major international medal was won at the Melbourne 2006 Commonwealth Games when England took bronze, followed by the same finish at both the Delhi 2010 Games and 2011 World Championships (now the Netball World Cup).

A fourth bronze medal followed this summer at the 2015 Netball World Cup in Sydney following her recent return to international duty- a fine way to end one of the most impressive careers in English netball.

Fans will be delighted to know that, despite her retirement, Tamsin will continue to coach Surrey Storm in the 2016 Vitality Netball Superleague season and will be present on the bench at all matches, home and away, as Storm look to retain their champions title.