England mid-courter Tamsin Greenway has today announced her immediate retirement from all forms of netball. 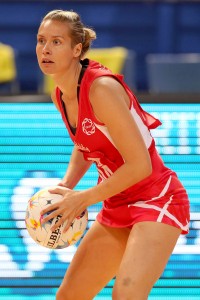 Having had a chance to reflect following her return from Australia, the hugely popular Wing Attack has now called time on a highly decorated playing career.

Tamsin said “After a lot of thought I decided it was time to hang up the trainers! I couldn’t think of a more fitting way to end my playing career then winning the Superleague with the mighty Surrey Storm and then playing the summer out in the red dress at the World Cup in Sydney, bringing home the Bronze.”

“I’m not sure many seasons would top that and so I felt it might be best to quit whilst I was ahead.”

She added “So many people have helped, guided, supported and looked after me over the years. To all my teammates, coaches, teachers, friends and sponsors I owe a great deal.

“Special thanks have to go to Rob Bond and Barbara Norman who started it all, my parents who have played every game with me and more, and of course the ‘oracle’ of netball Lyn Gunson.

“I’m so looking forward to what I can do for netball from the side lines, without the aches and pains!”

Having made her debut against South Africa back in December 2004, Tamsin went on to collect 67 England caps.

A first Netball World Cup, or World Championships as it was known at the time, appearance followed in 2007 with a first major international medal collected three years later at the Commonwealth Games.

Tamsin was a consistent fixture in that side as she appeared in every England match at the tournament. The Roses went on to collect bronze with an emphatic win against Jamaica.

The following year she was selected into the World Cup squad to compete in Singapore. Another dominant third place play-off victory over Jamaica secured a second bronze in as many years.

In 2013 the mid-court maestro took some time out of the game to have her first child.

An incredible return was almost completed in April 2014 when she led Surrey Storm to the brink of Netball Superleague glory, only to see her side lose out to a last second Manchester Thunder goal in arguably the greatest Grand Final fixture ever played.

Showing the resolute determination which has typified her career, Tamsin refused to stay down for long and her redemption was gained a year later. In front of a record domestic crowd at the Copper Box in London, Storm finally clinched their maiden Superleague title with a convincing victory over Hertfordshire Mavericks.

A year later and she was able to mark her final game in the red dress with a fine display to help her Roses teammates claim a bronze medal in Sydney.

England Netball thank Tamsin Greenway for her fantastic contribution to the England team and wish her all the best with her future endeavours.